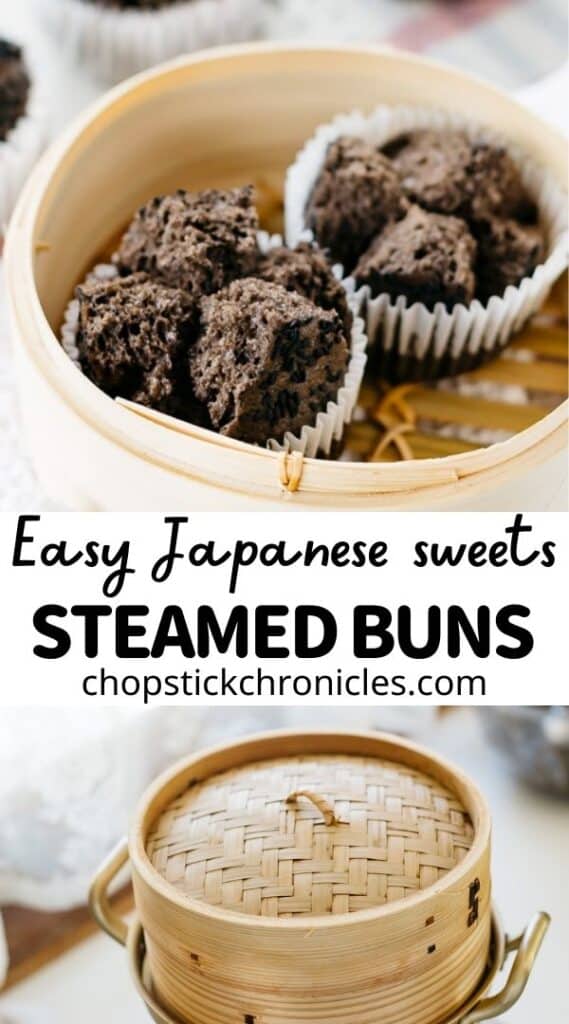 What is Mushi Pan (Steamed Buns)?

Mushipan is little Japanese steamed buns with a cottony soft texture that are flavoured with various fillings such as cocoa, strawberry, matcha and yoghurt etc. The word “Mushipan” translates to “steamed bread”, however, these are more like steamed cakes. They even look similar to muffins but the difference lies in the texture.

Because these buns are steamed, they have a lighter and softer texture which make them easier to eat and digest. Mushipan was a big food trend in the late 90s when convenience stores started to sell these little steamed cakes. Nowadays, I really like this black sesame ingredient in the buns because of the nutty flavour.

You need to gather cake flour, which contains around 9% protein for a fluffy texture, sugar (I used brown sugar for retaining some moisture), baking powder, egg, milk, and black sesame seed paste.

Kuro(Black)Goma(sesame) is well known as a superfood not only in Japan but worldwide. I certainly love both black and white sesame seeds. Japanese often incorporate sesame seeds into daily Japanese home cooking. For example, sesame seeds are typically used in Goma-ae, sprinkled over Sekihan azuki bean rice etc.

“Sesame lignan” is getting a lot of attention because it is a component that exists only in sesame seeds. It has been said that it has an antioxidant effect, preventing cancer and lifestyle-related diseases, enhances liver function, and protects the liver from alcohol. reference: Ministry of Agriculture, Forestry and Fisheries

Where Can I Get Black Sesame Seed Paste From?

Q: What else can I use if I don’t have a bamboo steamer?

A: I used a bamboo steamer. However, it is only for the video and photography purposes as it looks nicer. However, it is not necessary for you to use one if you don’t own one yourself. Well, you can use it if you want, but to make 6 buns will take 70 minutes if you can only cook 1 at a time!  I only have a tiny bamboo steamer which I bought from Daiso. I steamed one in the bamboo steamer and steamed the rest with a much bigger steel steamer which can fit 6 ramekins at once. So if you are thinking that you can not make this because you don’t have a bamboo steamer, then that isn’t true. Yes, you can! Any steamer will work.