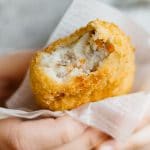 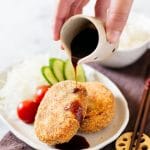 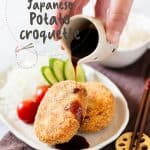 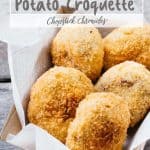 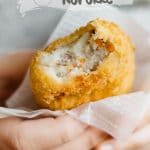 Japanese Potato Croquettes, or “Korokke” as they are called in Japanese, is a delicious fried food made from panko-crumbed mashed potato with carrot, onion, and mince. In Japan, these are tasty street food but are also one of those Japanese home-style dishes that can easily be made from scratch.

Korokke is the Japanese name for potato croquettes. The outside of Korokke is perfect golden-brown that gives a wonderful “Crunch!” sound as you bite into it. And inside is the perfect “hoku hoku” mashed potato with the ultimate ratio of potato to beef mince.

The secrets to “hoku hoku” Japanese Potato Croquettes are; 1. Choose a starchy variety of potato. 2. Before you mash the cooked potato, shake it around to fluff up the outside and fry off the excess moisture from the potato. 3. Use Panko crumbs

What is “Hoku Hoku” Texture?

Sometimes food textures are described in Japanese using onomatopoeias (where the sound of the word is similar to the sound of the thing you are describing). It is very difficult to translate these words exactly. Sadly, only those who have bitten into a Korokke will know the comforting softness and warmth of the starchy steamy potato texture and know what I am talking about…..

So, let’s make some “hoku hoku” deliciousness so you can know the hidden meaning too! In order to achieve the perfect “hoku hoku” texture, using the right type of potato is the key. The two main types that you find in Japan are “Meekuin” (メークイン) and “Danshaku” (男爵).

Usually, potatoes are classified into three types: Starchy, Waxy, and All-purpose. The Starchy type makes for a great “hoku hoku” texture in Japanese Potato Croquettes because they are high in starch and low in moisture. And the Japanese variety Danshaku is the one most suitable for Korokke.

So I recommend making your Japanese korokke with a starchy type of potato in your country to experience the “hoku hoku” texture. For example, in the USA, the classic Idaho, or Russet would be a great choice for Japanese potato croquettes. In Australia, I usually use the Sabago variety which is more of an all-rounder.

How to Cook Potato for Making Croquettes

There is also one other important cooking tip to create the “hoku hoku” texture. After the potato is cooked and before you mash it, drain the water from the potatoes, put them back in the pot and shake them around to rough up the outsides.

This will result in the potatoes looking like they are covered in snowy-like potato powder. This technique helps decrease the amount of moisture in the potato through evaporation and makes the potato fluffier overall. This technique is called “kofuki imo”, and potatoes made this way are served as side dishes in Japanese cuisine.

In order to get the crispy and crunchy outer coating, you need to use Japanese panko crumbs. Since the word “Panko” adopted into English and gained popularity over ordinary bread crumbs, you can purchase Panko from supermarkets and also online. If you can not access, Panko can be made easily at home following my Panko recipe.

Short Cut for the Batter

I usually short cut the process by making the batter before coating panko crumbs. Generally, Japanese cover shaped mashed potato with all-purpose flour, then dip it into beaten egg, then coat with panko crumbs. I mix the egg and flour together to make the first two steps into one and cut out one step.

Japanese Potato Croquettes are Great for an Obento Menu

Q1: Can I use any potatoes that I already have in my pantry?

Q2: Could I make in bulk and store korokke for later use?

A: Yes you can. Make Korokke in bulk and freeze them before you deep fry. Wrap with cling wrap individually then place them in a freezer ziplock bag. It will keep for about a month in the freezer. And you can deep fry without defrosting them.

The following Japanese side dishes are good to have with korokke.

If you liked my recipe for Japanese potato croquettes, please rate it and leave a comment below. 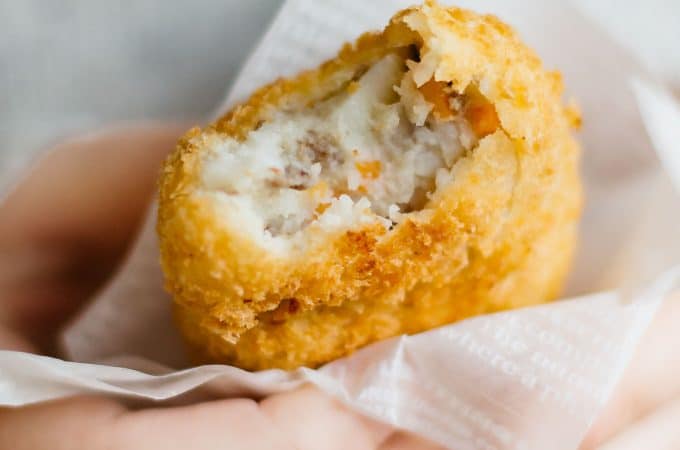 *1 Choose starchy type potatoes such as Classic Idaho or Russet. *2 or half a small onion *3 or half of a small carrot  *4 I recommend to use Panko crumb, if you can not access commercial panko, you can make your own panko from white bread that is as good as commercially made panko.  *5 This technique is called “Kofuki imo” which removes extra moisture in the potato, in order to make the “Hokku, hoku” texture.  *6 I sometimes make 2 of 1/8 potions into smaller sized korokke for Bento Lunch box.  *7 This is the shortcut step discussed in the post. Usually cover with flour, then dip into beaten egg, and then coat with Panko crumb.  8* If you don’t have a thermometer you can check if the oil is the correct temperature by dropping a bread crumb into the oil. If the bread crumb drops about halfway down into the oil, then floats back up – you are at the perfect temperature. *9 Or you can freeze them for later use. Before deep frying, freeze them. Then wrap with cling wrap individually and place them in a ziplock bag. It will store for a month in freezer and will be great for Obento lunch menu.  *calories of the potato croquettes are indication only as the deep frying oil is difficult to accurately measured. 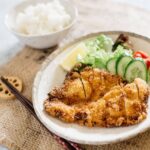 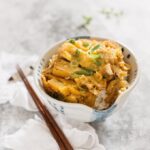 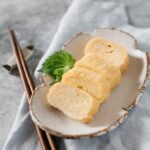 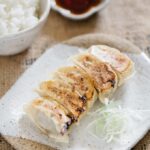 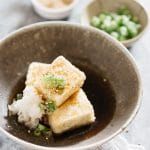 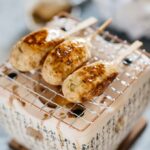 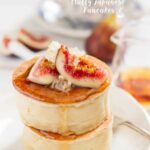 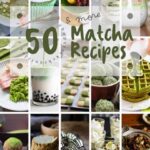 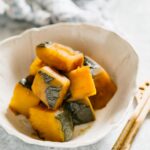