Japanese cucumber salad known as “Kyuri no Sunomono” in Japanese is a very refreshing, light, and delicious side dish. It is healthy dish consisting of thinly sliced cucumber and Wakame (a type of seaweed) that is marinated in rice vinegar, which is called “su” in Japanese. 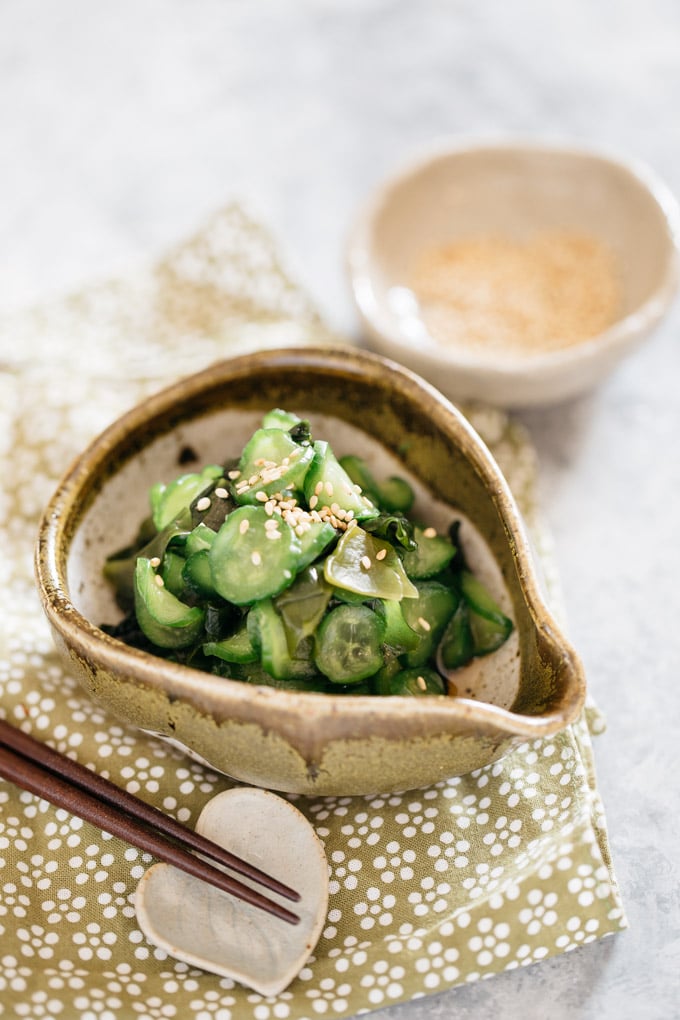 Which Cucumber to Use?

The main ingredients of Japanese cucumber salad are cucumber, wakame seaweed, and vinegar.  This is the perfect recipe for enjoying the refreshing-ness and crunchiness of cucumbers. So it is important to use the right cucumber. I was surprised that almost all vegetables are ginormous in size here compared to Japan.  Those thick cucumbers are not good for this recipe. In Australia, the cucumber variety that I use is Vietnamese cucumber which are small cucumbers and close to what I get in Japan. 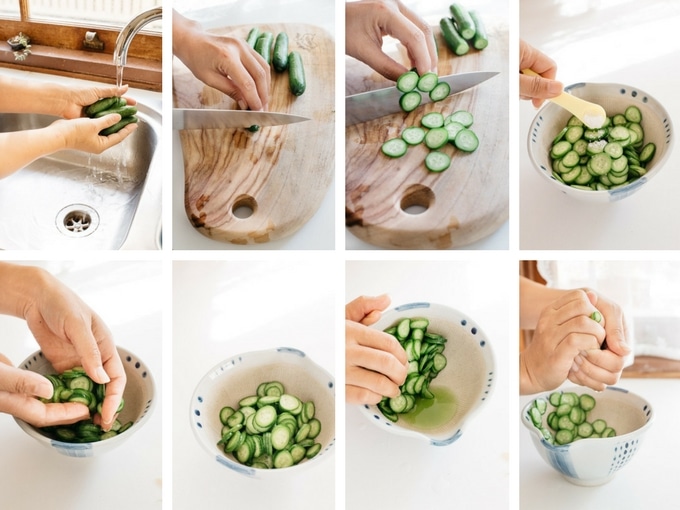 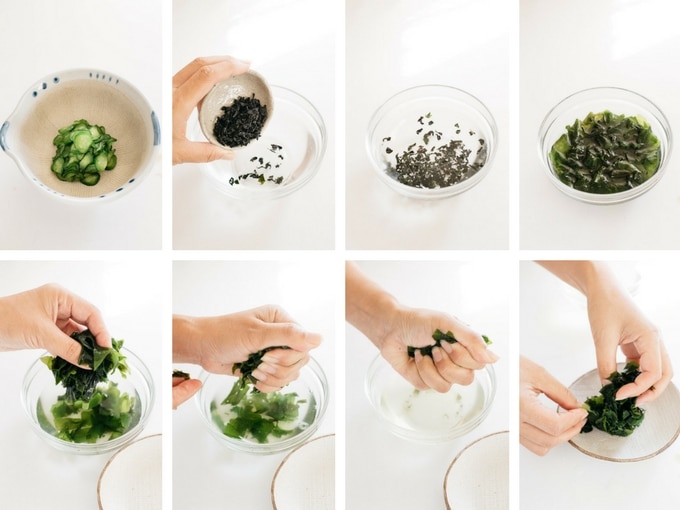 Wakame seaweed is often used as an ingredient in Japanese cucumber salad. They are available in dried form from any asian grocery stores or online.  It absorbs water, so you only need a little bit like 1 tsp. Put the seaweed in cold water and leave it for 10 minutes. Squeeze the water out and cut them if necessary. Wakame seaweed can be replaced with cooked octopus bits, Shirasu ( juvenile sardines, sand lances, and herring), or Chirimen (dried shirasu). 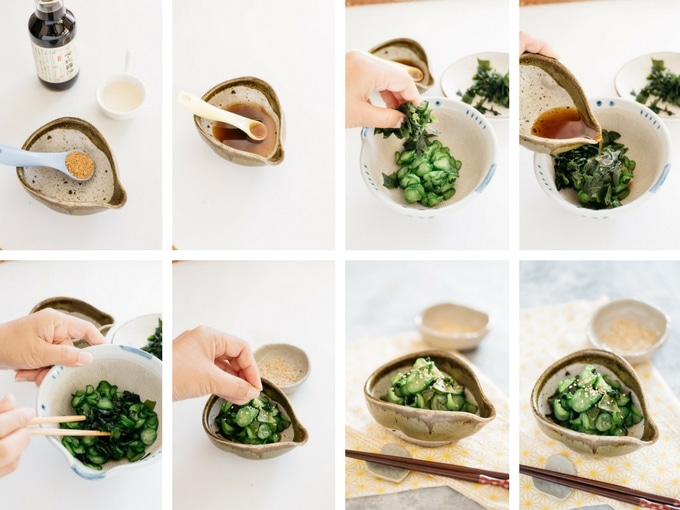 Commonly used vinegar in Japan is known as “Su” and it is usually referred to wheat, sake lees, rice and corn blended and brewed vinegar. Another generally available vinegar is “Kome Su” which contains more than 40g of rice per 1 litre of the vinegar. Those two types are generally used to cook Japanese cucumber salad, salad dressings, pickles and Sushi in Japan. There is also Sushi vinegar that has the sugar and salt already mixed in to the vinegar. In Australia, I can get the same vinegar that I used to use in Japan from local Japanese grocery stores and the brand I use is Mitsukan (Mizkan). 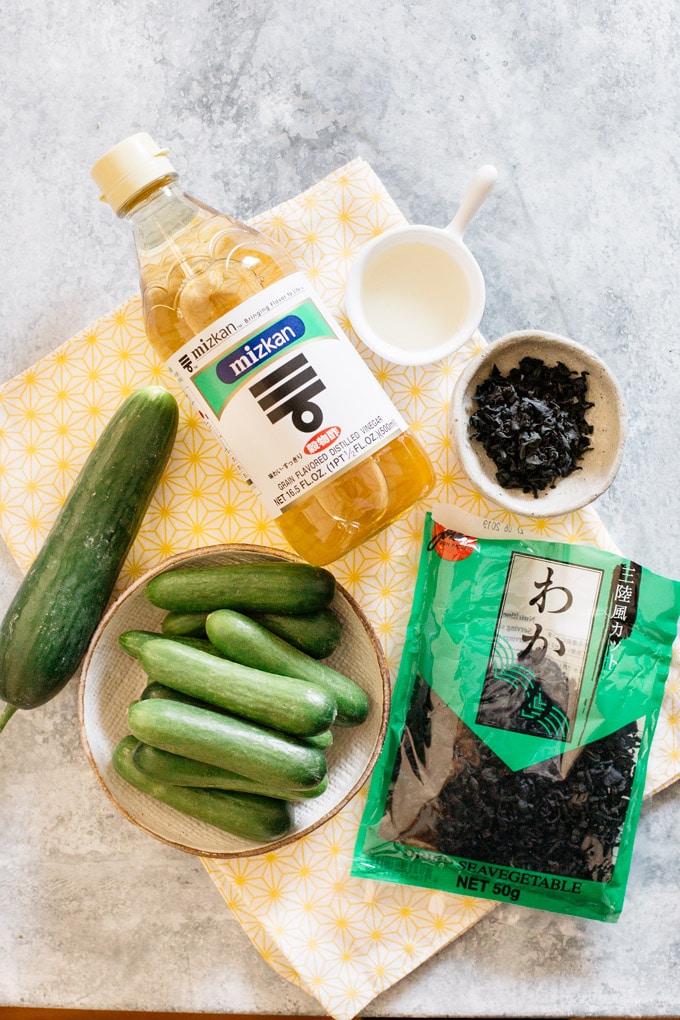 It’s perfect as a small summer salad or side dish to any meal. This is also super easy to make, like unbelievably easy, you don’t need anything special to make it and it you don’t any sort of skill (just basic cutting skills)! It is low in calories and vegan. 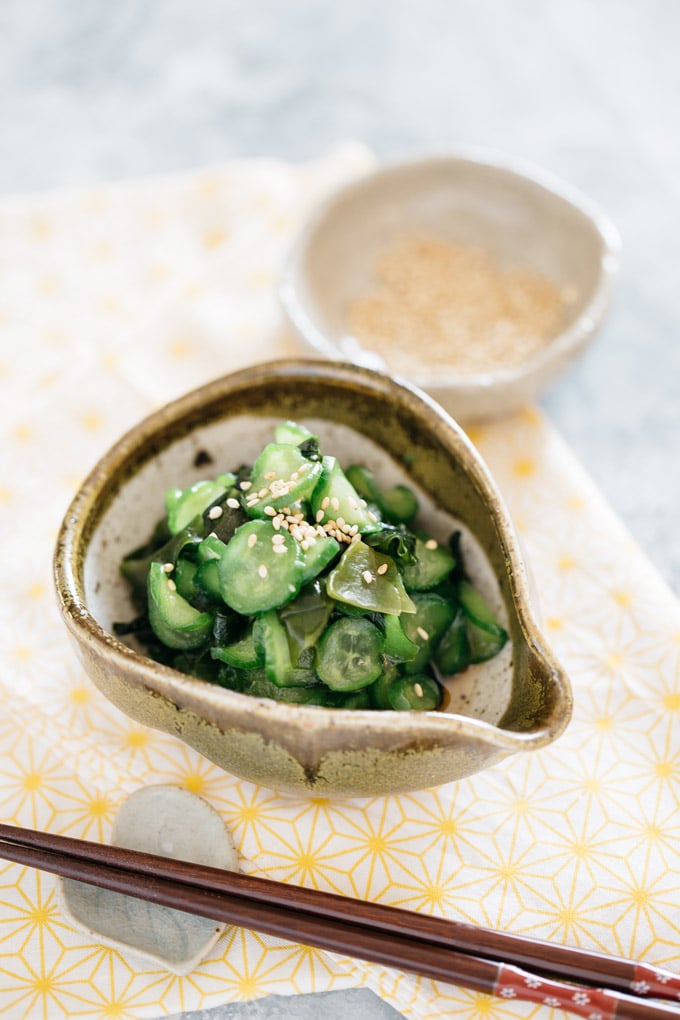 Other vinegars can be replaced - white vinegar, apple cider vinegar, balsamic vinegar, wine vinegar but each different vinegar will taste differently.  Vietnamese cucumbers or continental cucumbers are recommended to use for this recipe.  Wakame seaweed can be replaced with bits of cooked octopus, and Shirasu baby fish (cooked and dried) Instead of sprinkling white sesame seeds, garnish with finely chopped ginger is delicious too.