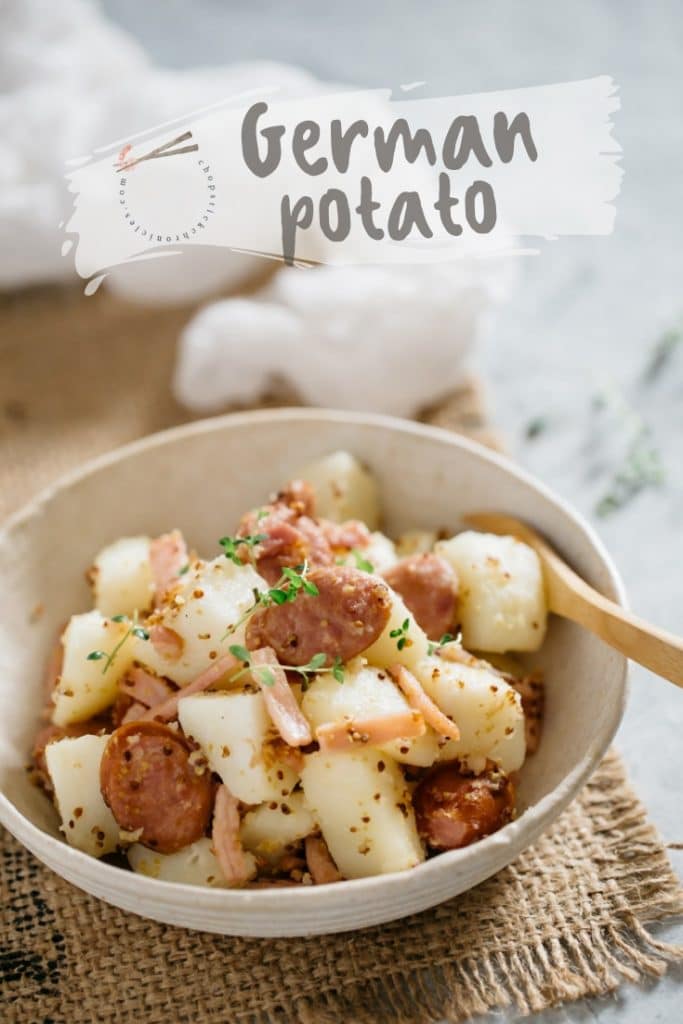 Hearty, easy to make Bratkartoffeln German Fried Potato is another German dish that Japanese love and make often at home. You can cook Bratkartoffeln in under 20 minutes. German pan-fried potatoes are great for a busy weekday dinner! Why Bratkartoffeln is on a Japanese food blog?

I am sure that you are wondering why this German dish is on a Japanese food blog. Some German foods such as Baumkuchen are more popular and well known in Japan than they are in Germany. I have been sharing German food that the Japanese absolutely love and make often at home. My Mother often cooked Bratkartoffeln because she loves potato and bacon. And who doesn’t? 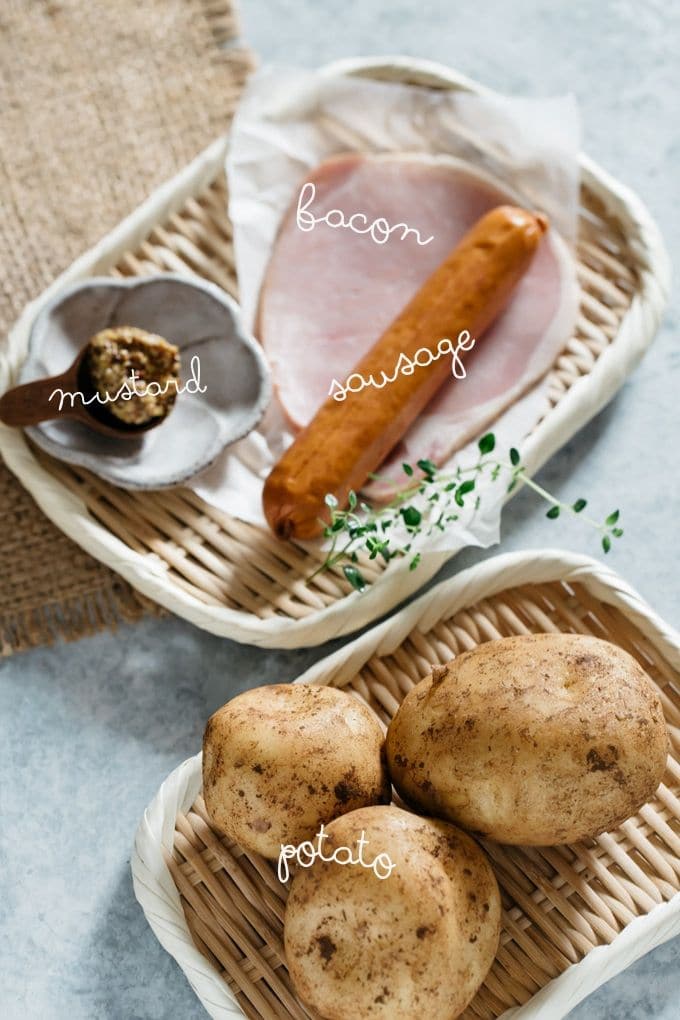 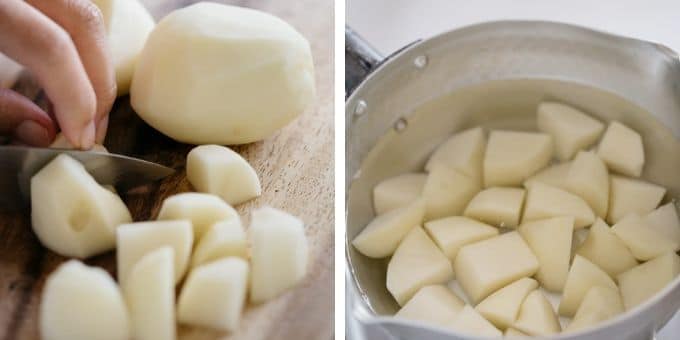 What types of potato is good for making Bratkartoffeln?

Making Bratkartoffeln easier to cook, I first cook the potato and then fry it with sausages and bacon. I want to keep the shape of the potato whilst also aiming for the “hoku hoku” texture. It is a hard onomatopoeia to translate, but it is the comforting softness and warmth of the starchy steamy potato texture. So to achieve keeping both shape and the texture, I use an all-rounder potato. If you would like to read more about potato types, check out my post “Japanese potato Croquettes” 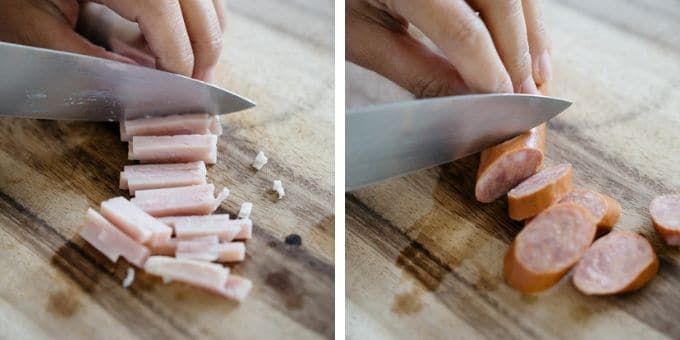 The best dish with German Beer

Often dishes pair with wine or sake, however, I believe that German beer is the best match with Bratkartoffeln. A few years ago, I travelled the Romantic Road with my friend. We tried a German house beer in Rothenburg ob der Tauber recommended by a German gentleman who shared a table with us. It was the best ever beer I have tasted and would best suit this Bratkartoffeln to drink and eat with. However, we don’t have the beer here, so I would recommend Japanese beer. 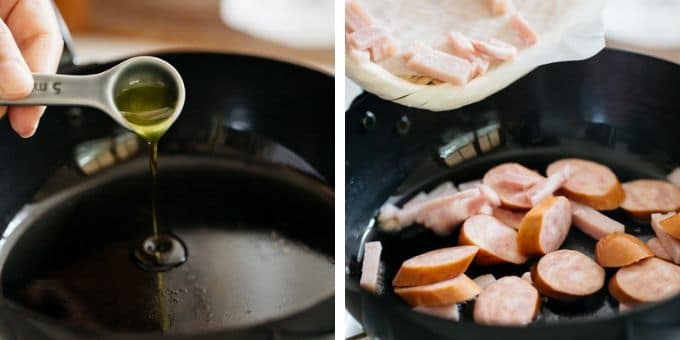 My fond memory of Germany and recommendations

It was cold though I definitely recommend visiting at Christmas time and go to as many Christkindlmarkts as possible. Every Christkindlmarkt is different with beautifully lit up Christmas trees, lots of delicious German food stalls, and heartwarming atmosphere. You will find German people drinking gluhwein chatting and laughing and children on a beautifully lit merry-go-round. And definitely try German house beer! It is absolutely delicious even when drinking beer in winter. 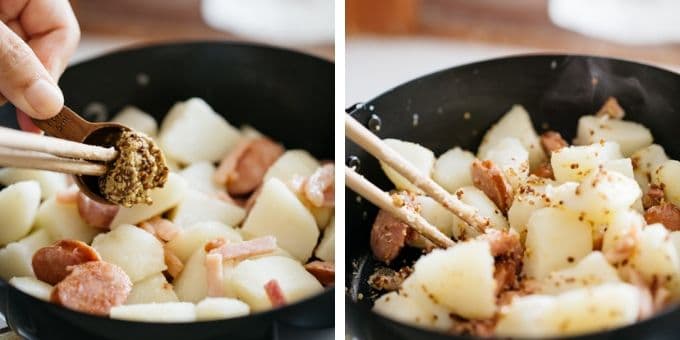 And if you ever have a chance, visit Füssen. We drove to Füssen from Rothenburg ob der Tauber making my record fastest 174km/hour!! It was an amazing experience to drive a car that fast (well, I did not, my friend did). When we arrived in Füssen, it was a cold and kind of dull and cloudy day but next morning, I was woken up by my friend saying “It makes Shiho very happy!” It snowed overnight and still was snowing. It was just so beautiful and magical, I will never forget. 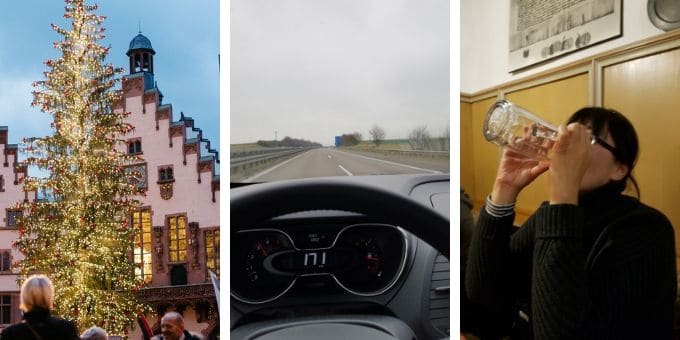 If you liked the recipe, please rate it and leave a comment below.  Check out my other German recipes that Japanese love such as Baumkuchen and Easy soft pretzel. 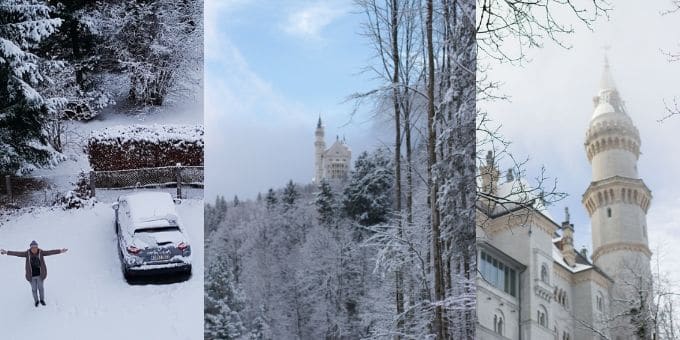 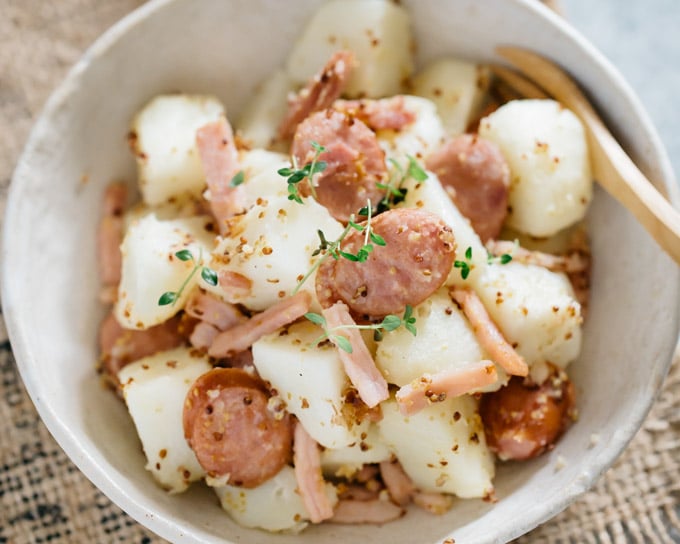 *1 I used thyme to garnish. You could replace with chopped scallion too.