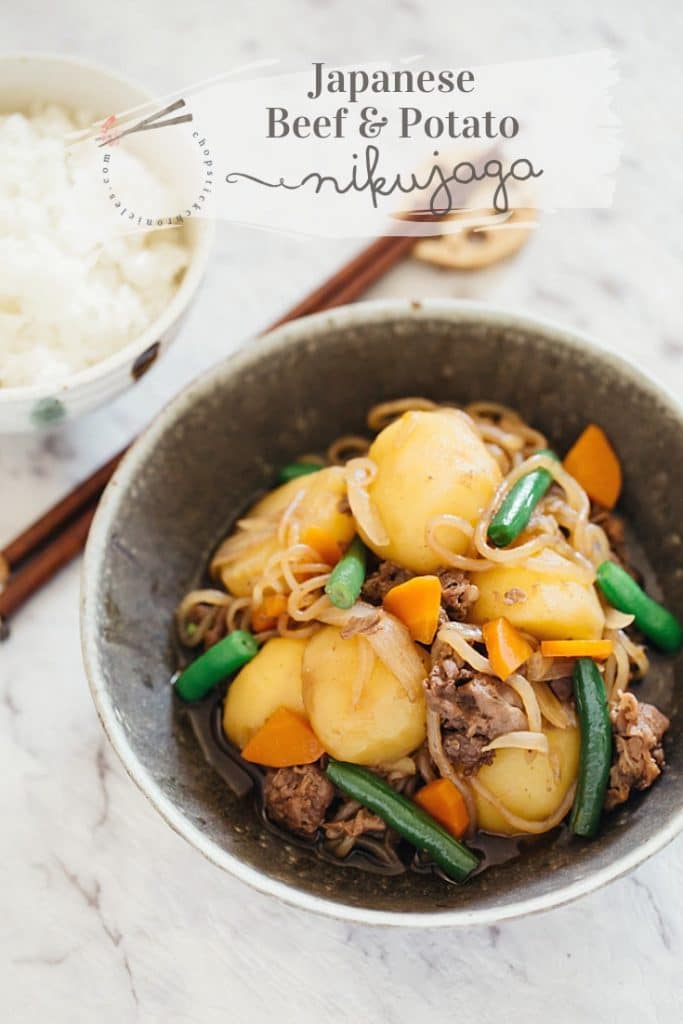 Nikujaga is a delicious Japanese dish made primarily from two main ingredients: meat (“niku“) and potatoes (“jagaimo”). It is one of the staple Japanese weekday dinner dishes. So it is quick to cook and satisfies all the family’s taste buds. Literally Nikujaga means meat and potatoes.  Niku is meat and jaga is the short form of Jagaimo, which means potatoes. Basically the meat and potatoes are stewed in soy sauce which has been sweetened with mirin and sugar. Nikujaga is a traditional dish and recipe that Japanese mothers pass down from generation to generation. 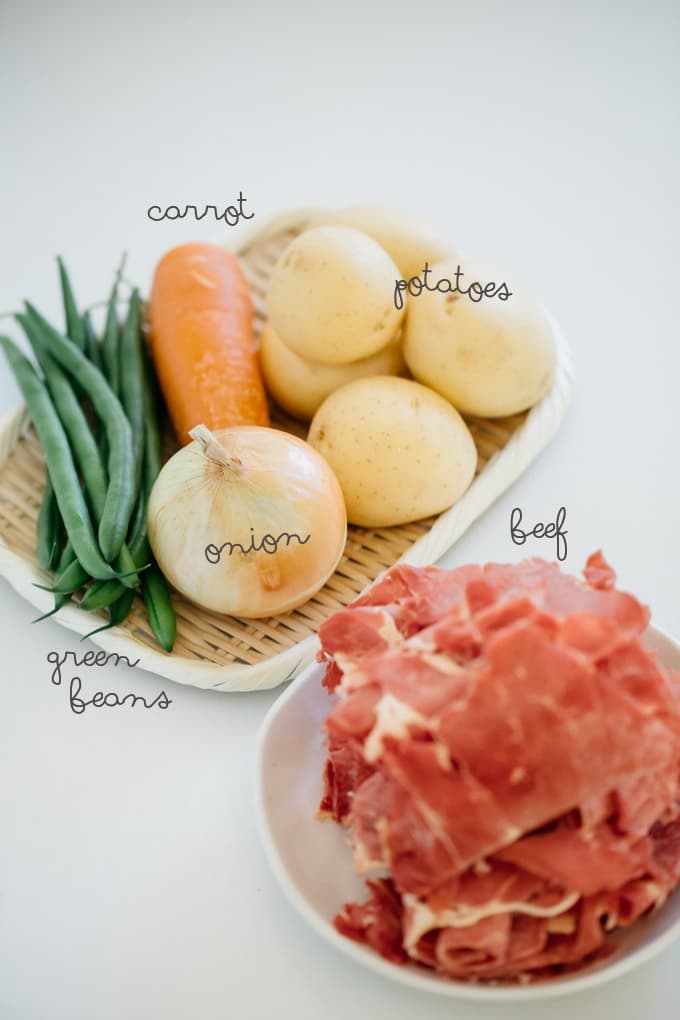 Konnyaku noodle may be unfamiliar to you. However, it is a unique ingredient used in the Nikujaga recipe. Konnyaku has an edible corn and is a commonly grown plant. Konnyaku comes in many different forms. Konjac is another name for it. Often the noodle form of konnyaku is used for Nikujaga and Sukiyaki. 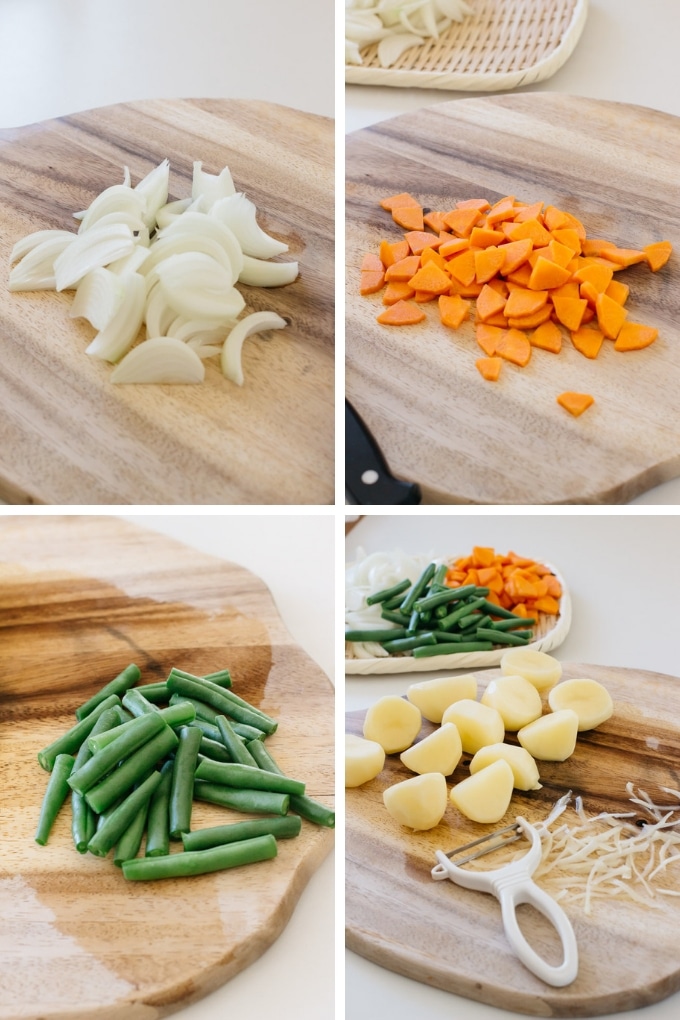 How to prepare Konnyaku noodle for Nikujaga

Konnyaku, is a popular diet food because of its dietary fibre of glucomannan and very low calories.  However it has a distinctively fishy smell, but fortunately there is a way to remove the odour. Place 2 litres of water in a pot and bring the water to boil. Add the konjac noodle and cook for a few minutes. Turn the heat off and drain the boiling water. This will remove the smell. 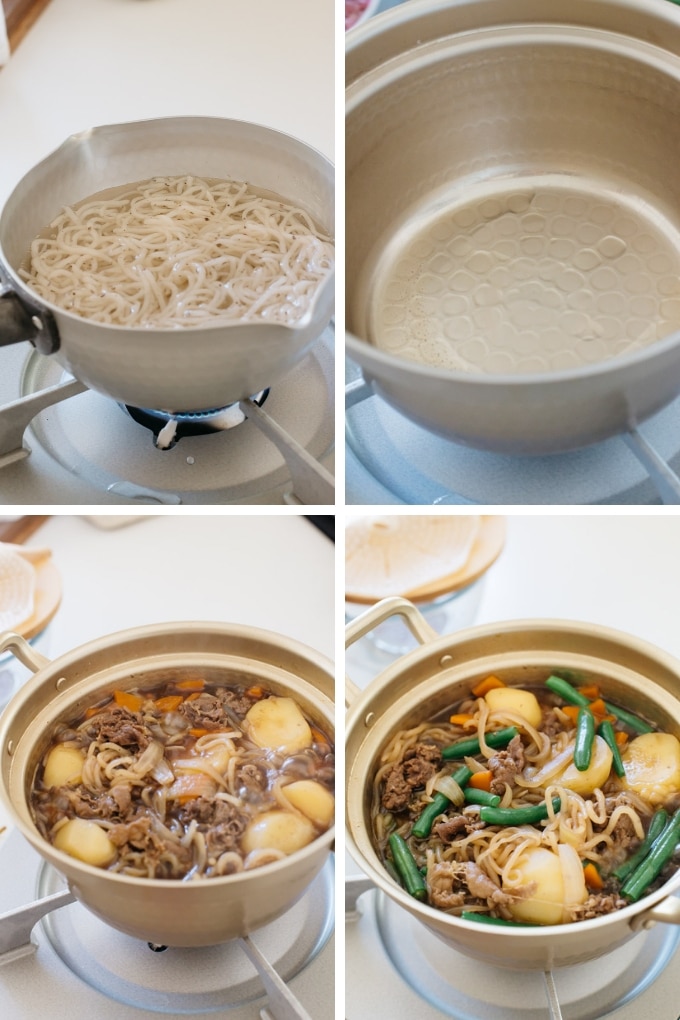 The reason that many Japanese dishes use thinly sliced meat, is because this is how meat is packaged and sold in Japan.  I usually buy those thinly sliced meats at Japanese grocery stores or Korean grocery stores. Finally, if you cannot buy the meat that has been sliced thin, you can do it yourself. There is a trick to slicing meat thinly. Cut it when it is very cold. 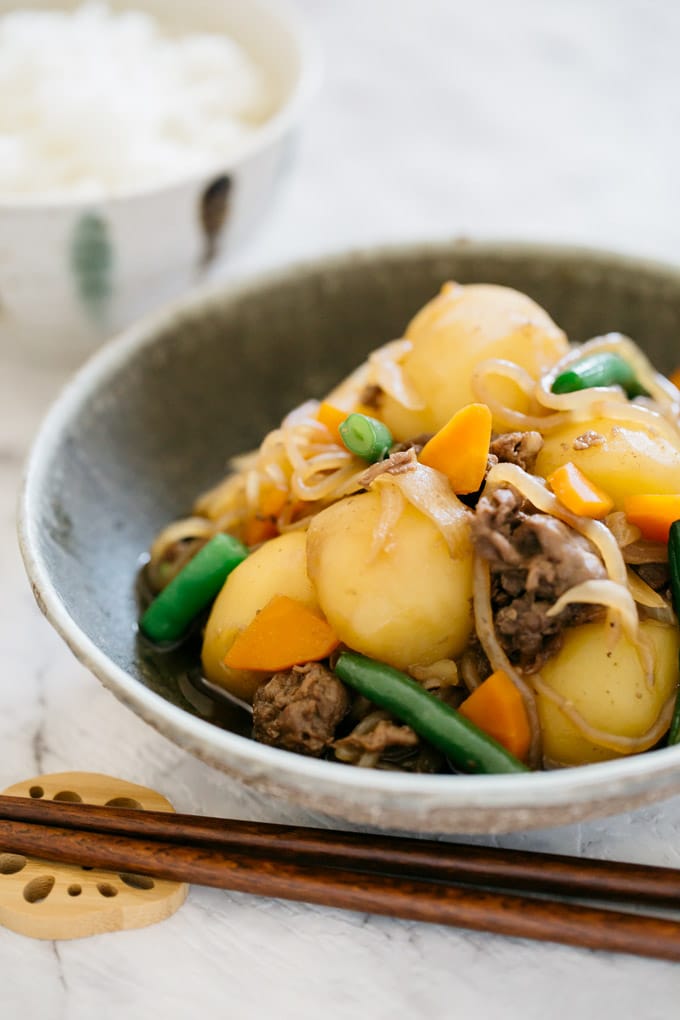 I hope you enjoy Nikujaga. If you can not remember the name of the dish, think about Mick Jagger 🤣And if you liked Nikujaga, please rate this recipe and comment below. *1 If you are unable to find thinly sliced beef, place the beef in freezer for a couple hours then slice it with a sharp knife.  *2 You can use instant dashi powder. If you using dashi powder, follow the packet instruction or add 1/2 tsp to 250ml water. *3 This Japanese cutting technique called "Mendori" and is used to avoid the vegetables such as potatoes, pumpkins and radish broken apart.  *4 This lid is called "Otoshibuta" and it is smaller than the pot diameter of the pot, so the lid sink in the pot over the ingredients in order to cook evenly. You can make this lid with parchment paper or aluminium foil, or buy them online.