Amazake is my favourite traditional Japanese sweet drink. It always reminds of me the casual job I had at a shrine in Ise (the Japanese city I used to live in) from New Year’s Eve to New Year’s Day. Japanese people have a custom of visiting shrines on New Year’s Eve and New Year’s Day, which is called “Hatsumode”.  I was employed as a registered nurse who provide first aide for worshippers of Ise Shrine and my uncle and aunt who live nearby the Ise shrine, brought me Amazake to drink during my breaks. It was so comforting and delicious in the cold winter. There are two types of Amazake; one made from Sakekasu (sake lees) and another made from Kome koji (rice koji, a kind of mold grown on rice). Despite what the name indicates, Amazake contains low or no alcohol. Sugar and water added to the sakekasu Amazake, because sake lees is not sweet and this one does contain a low amount of alcohol. 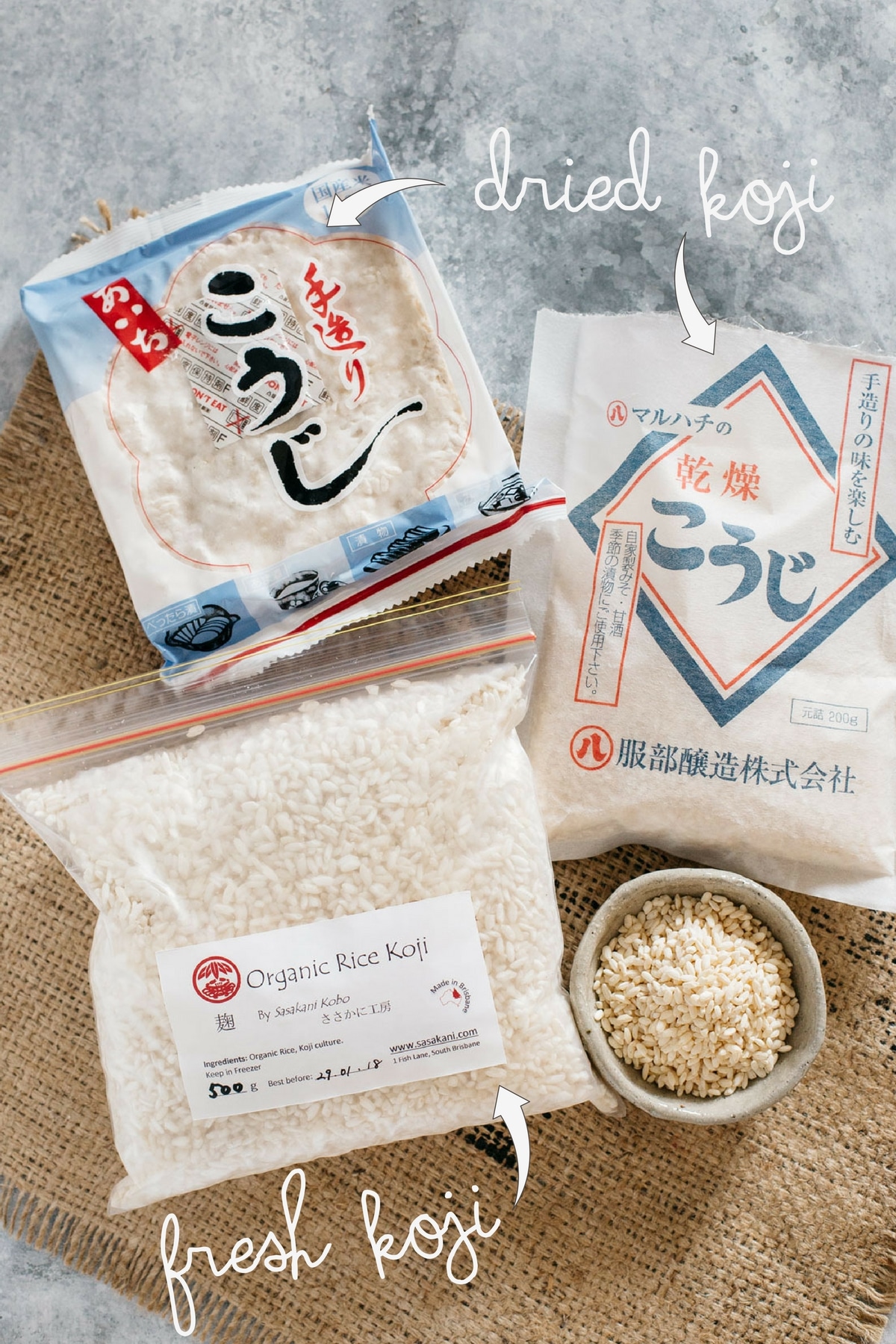 The Kome koji one becomes naturally sweet when the rice is fermented by koji. The one I had at Ise shrine was made from sake lees, which contains a little bit of alcohol, but I prefer koji amazake for the mellow sweetness and because it is healthier, so I am going to show you how to make this Amazake in an easy way for people who live outside of Japan. 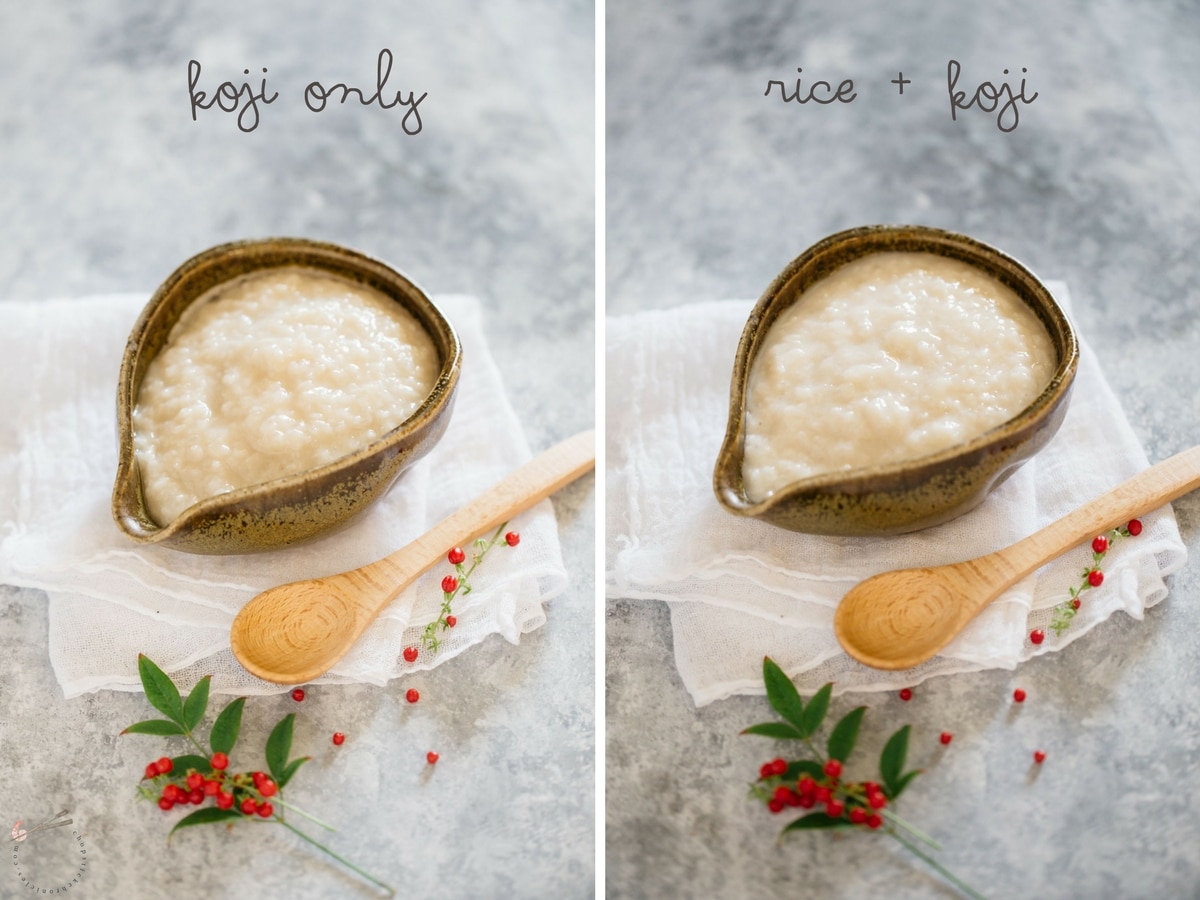 Amazake made from Koji has a mellow sweetness. It is hard to describe so you need to taste it for yourself. Ready-made Amazake is readily available to purchase from local supermarkets and convenience stores in Japan, as superfoods like fermented food are taking Japan by storm at the moment. But in my opinion, freshly made Amazake out of a pot at home is the most delicious! And we can experience it even if we live outside of Japan as long as you can get Rice Koji 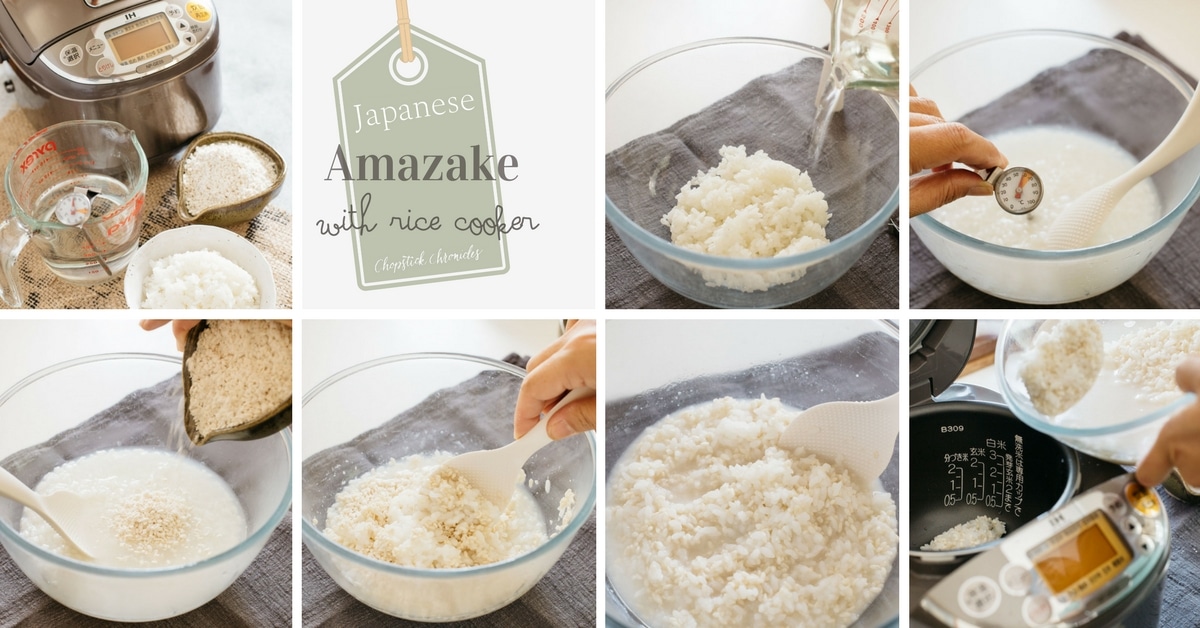 Amazake requires only two or three ingredients. You can make Amazake with just koji and water, or Koji, cooked rice, and water. Making Amazake consists of a few basic steps.

Step 2: add koji to it and combine well 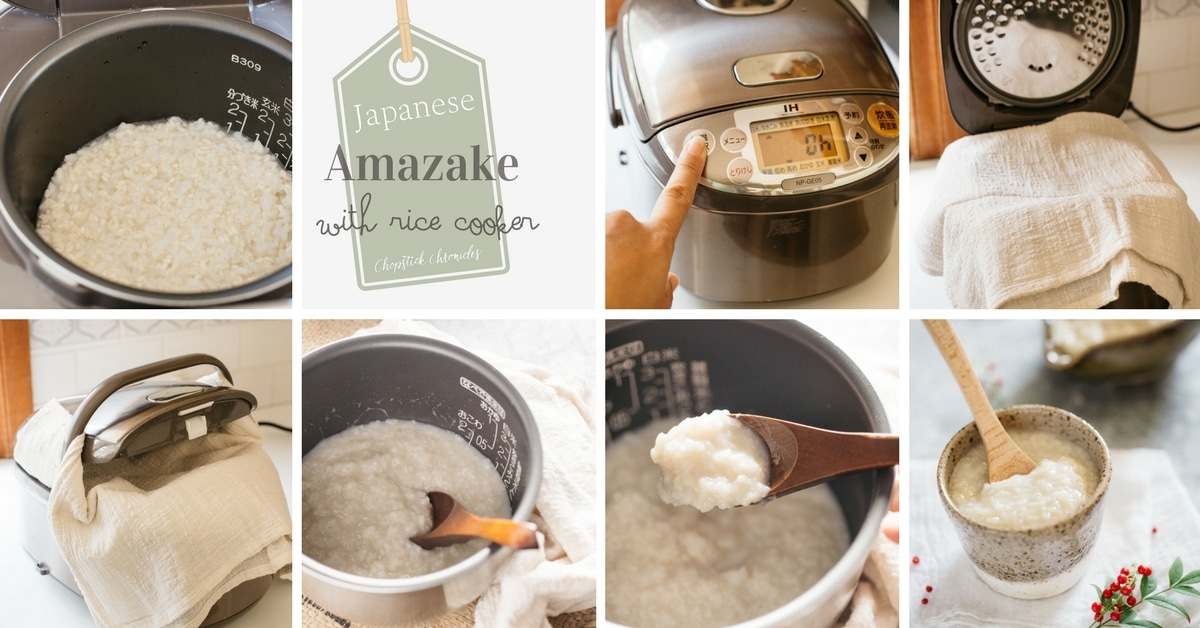 There are many ways to keep the 55-60 C degree ((131-149F) environment for the mixture to get fermented. Japanese people usually use a rice cooker, a yoghurt maker, a thermos, or Styrofoam. You can even purchase a kitchen gadget specifically made to make Amazake as the drink is so popular.  Because I don’t live in Japan now, I am not able to purchase that gadget easily so I use the other methods. I have tried a rice cooker, yoghurt maker, and Thermos and an Instapot (using the yogurt making function). 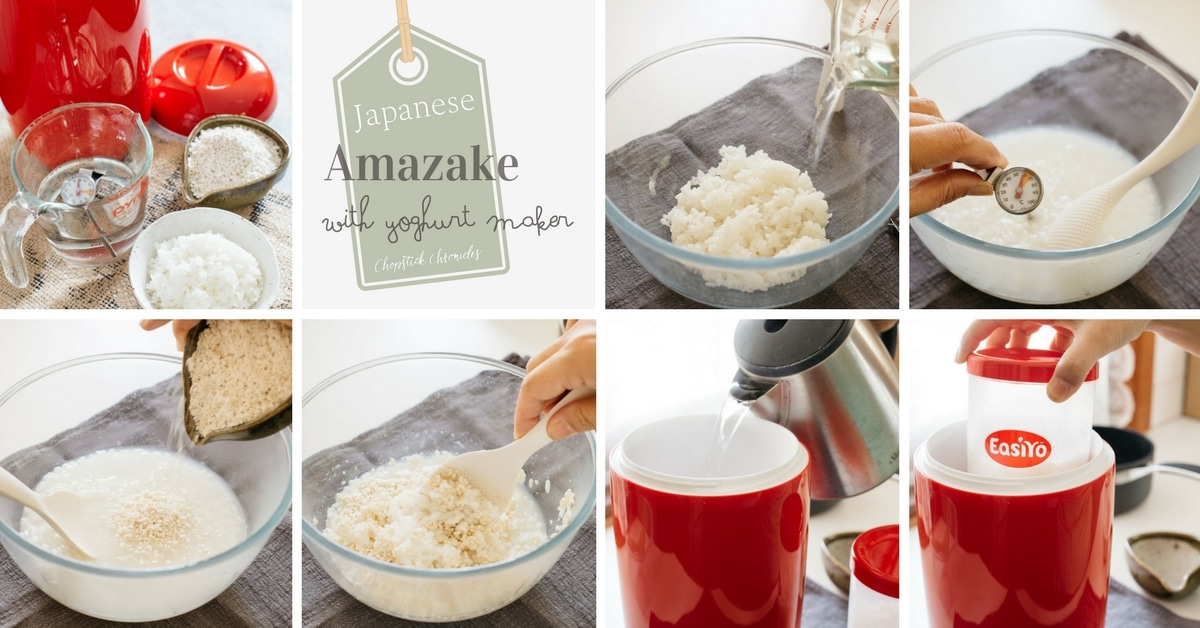 This drink only requires a few ingredients and simple steps but the difficult part is controlling the temperature. Why does it need to be kept in 55-60 C degree(131-140F)?  Because 60 C degrees(140F) is the most suitable temperature for the enzyme, which is called amylase (made from Aspergillus), to break down the rice starch into glucose. And that is the reason that Amazake is so sweet without adding sugar. 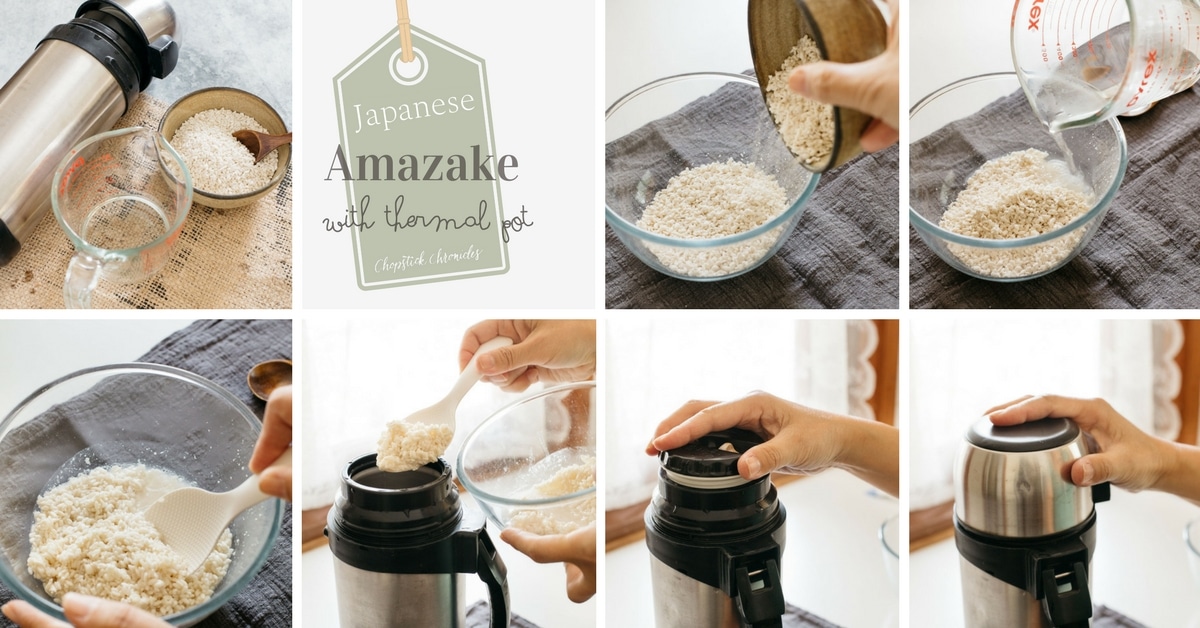 So I have tried 4 different ways to keep the fermentation environment 55-60 C degree(131-149F). My verdict is that the rice cooker was the easiest way to keep the temperature 55-60 C (131-149F) and therefore made the most sweet and delicious Amazake.

Using a yoghurt maker was ok but I had to reheat the mixture at around 4 hours and also change the boiling water to keep the container warm. Amazake was successfully made but was not as sweet as Amazake made in the rice cooker even though it was kept in for 8 hours whereas the rice cooker was stopped at 6 hours. 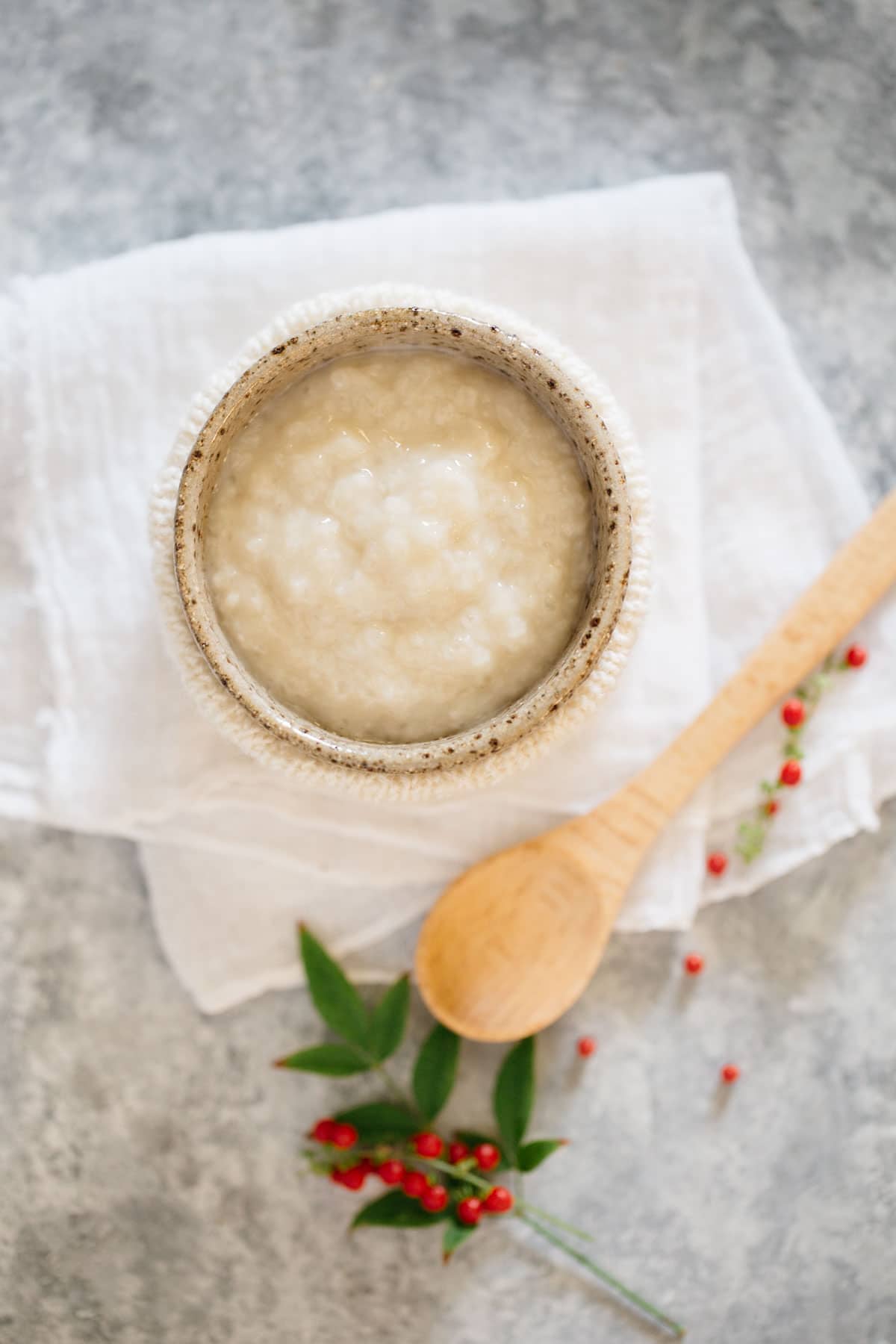 Since I bought an Instapot for Christmas, I decided to try it to make Amazake but it is not really good for this. I used the yoghurt making function but the temperature set for this function is about 40-45 degree Celsius (104-113F) which is quite low and for that reason the mixture was left a little bit longer and the Amazake ended up having a slightly sour taste like yoghurt.

Since I like this drink and because it has many health benefit, I am going to start making it regularly so I am going to purchase this Yoghurt maker

because this one can be set to different temperatures and also set different times as well. 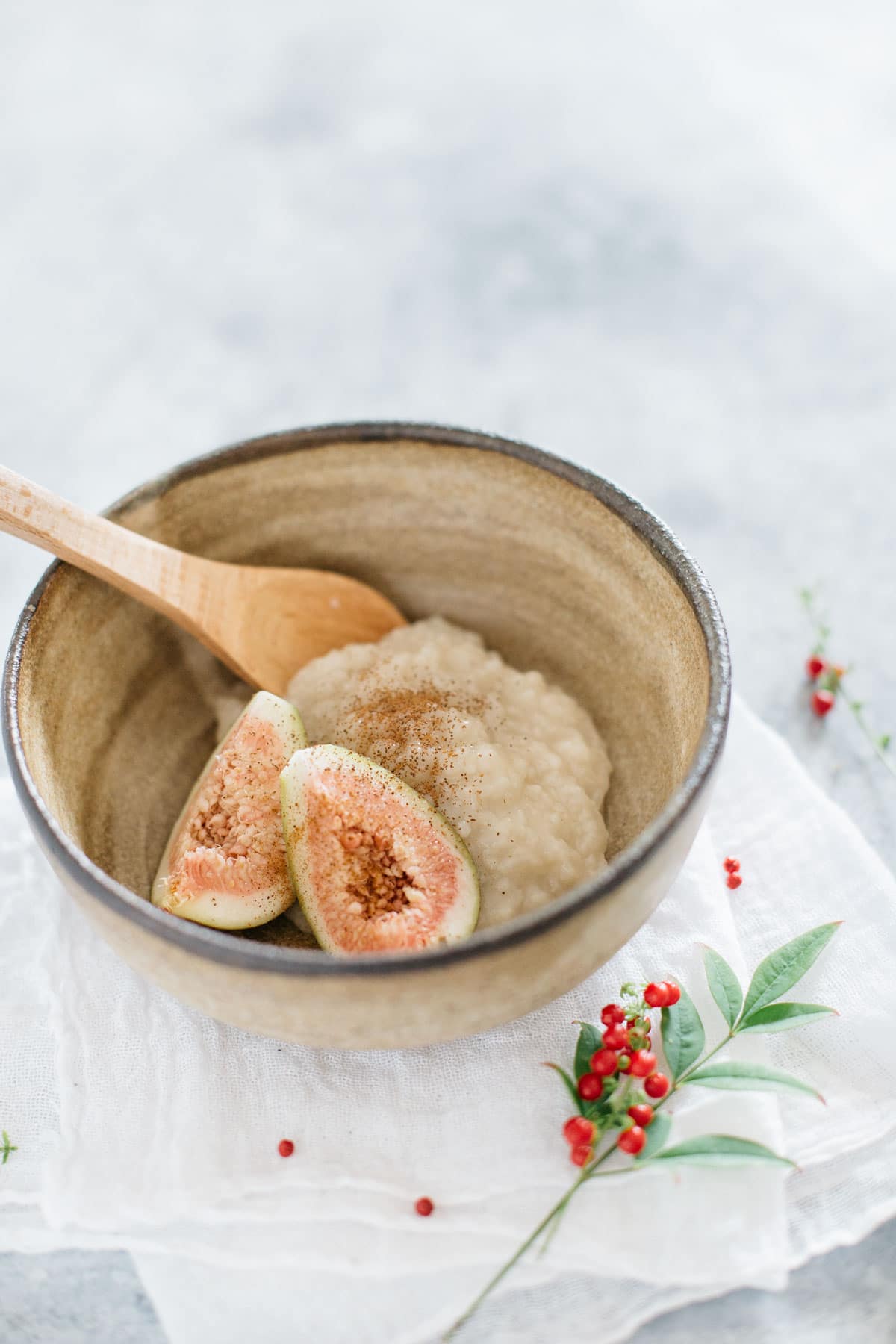 This drink is very popular in Japan and is even said to be a “beauty drink” or same as “hospital medical drips” because it contains Vitamin B1, B2, B6, Folic acid, Dietary fibre, Oligosaccharide, Cysteine, Arginine, Glutamine, and Glucose. Because it contains Vitamin B’s, it promotes the metabolism of the cell generation and to activate the skin cells’ turnover so it is drunk by Japanese women as a beauty drink. The dietary fibre and oligosaccharides in amazake also promote smooth bowel movements, which eliminates rough skin condition. 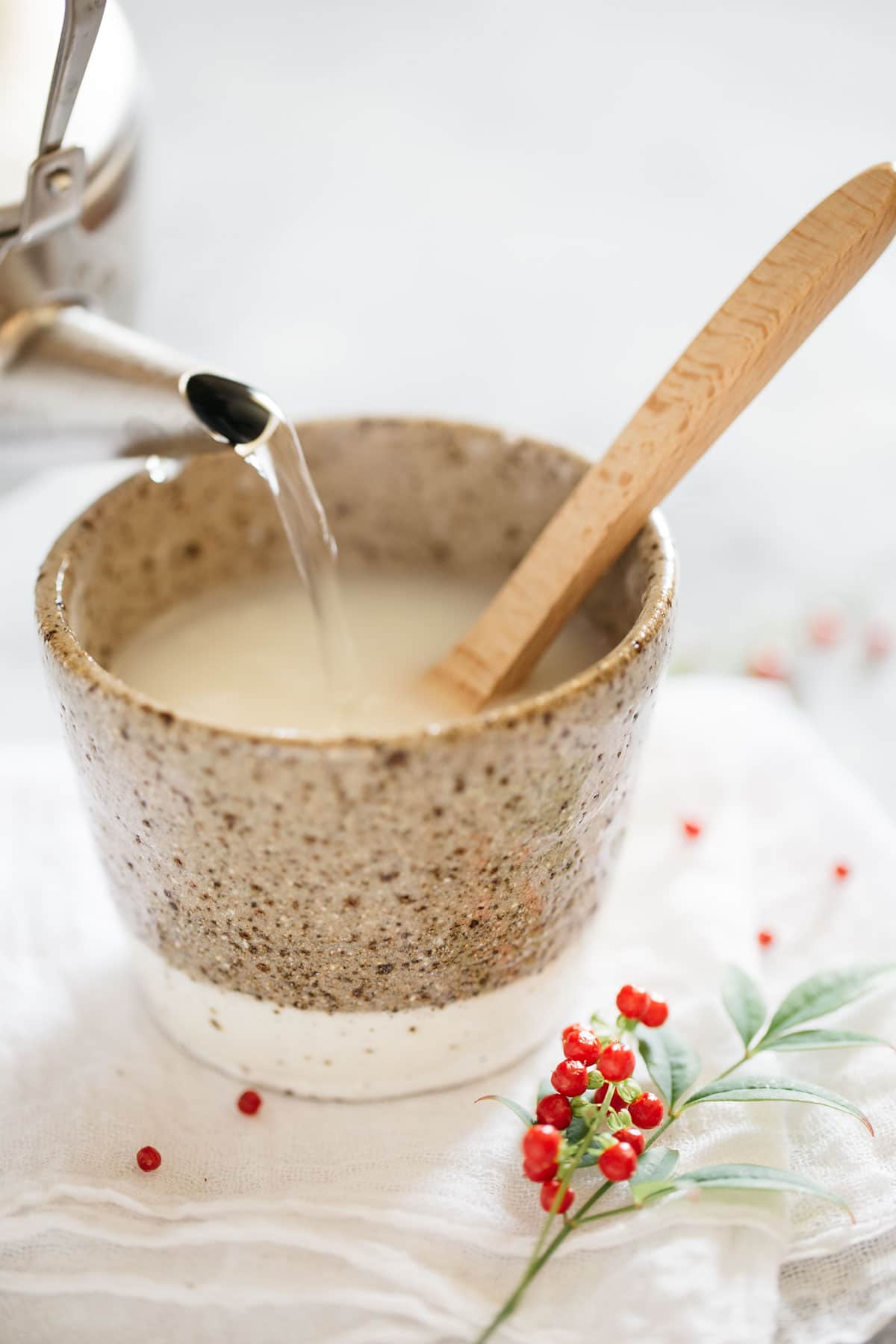 I like to drink this either in the morning to charge my brain and body, and sometimes at night before bed when I am tired and want to revitalise my body. The Amazake can be served hot or cold like Lemonade (link) and also can be used as an ingredient for different dishes, sweets, and baking. It is quite condensed and the sweetness is intense. If the Amazake is too sweet or too thick or rich, it can be diluted with hot or cold water. I hope you enjoy this recipe! 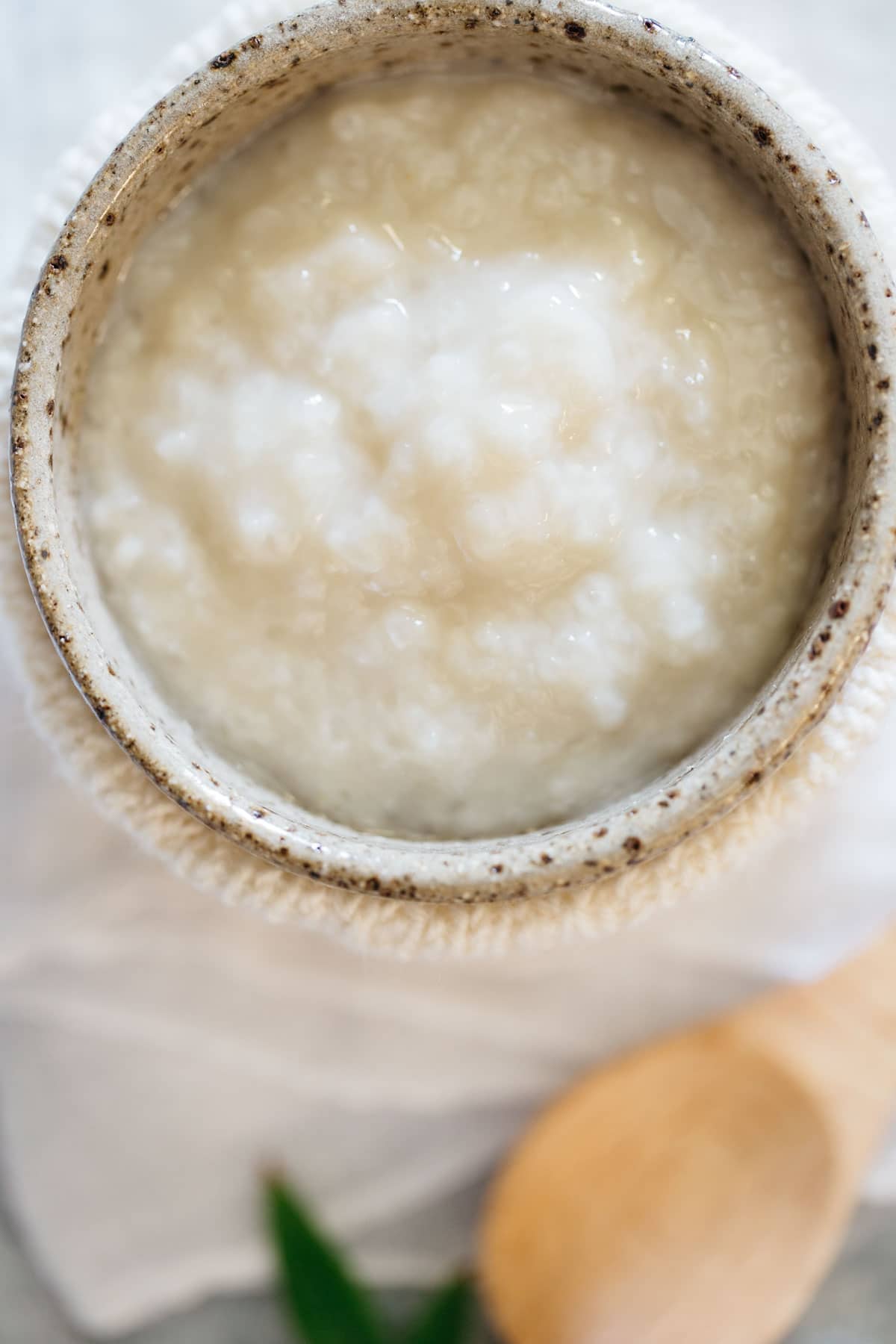 If you liked my recipe for Amazake, please rate it and leave a comment below. Also, don’t forget to follow me on Youtube, Pinterest, Facebook and Instagram to keep up to date with all the latest happenings on Chopstick Chronicles. Don’t forget to use the hashtag #ChopstickChronicles so I see your wonderful creations! *1 if the rice is cold, the hot water cooled down quickly so need to be hotter. Please adjust. *2 I stir the mixture at 4 hours in, to make sure all fermented evenly. Also check the mixture temperature if it is too low like 40 degree(104F), you may want to reheat to 60 C(140F) but need to be careful not to reheat to over 70C(158F). It will kill koji. *3 It can be stored in Freezer too and will last about 3 months. *4 cooking rice time is not included in the prep and cooking time.