The hot and humid weather is definitely calling for the traditional Japanese cold dessert, Anmitsu! Anmitsu is a Japanese traditional cold sweet, which has been enjoyed and loved by Japanese people for decades. Anmitsu is Kanten jelly topped with fruits, dango, azuki bean paste (an), ice cream, and Mitsu (dark brown coloured syrup). There is a similar dessert called “Mitsu Mame”. The difference between Anmitsu and Mitsumame is the topping; either An (sweet Azuki bean paste) or mame (beans). I don’t like the particular mame used in Mitsumame because it is kind of a hard cooked mame and not sweet but rather tasteless. I always picked them all out, so I usually make Anmitsu. 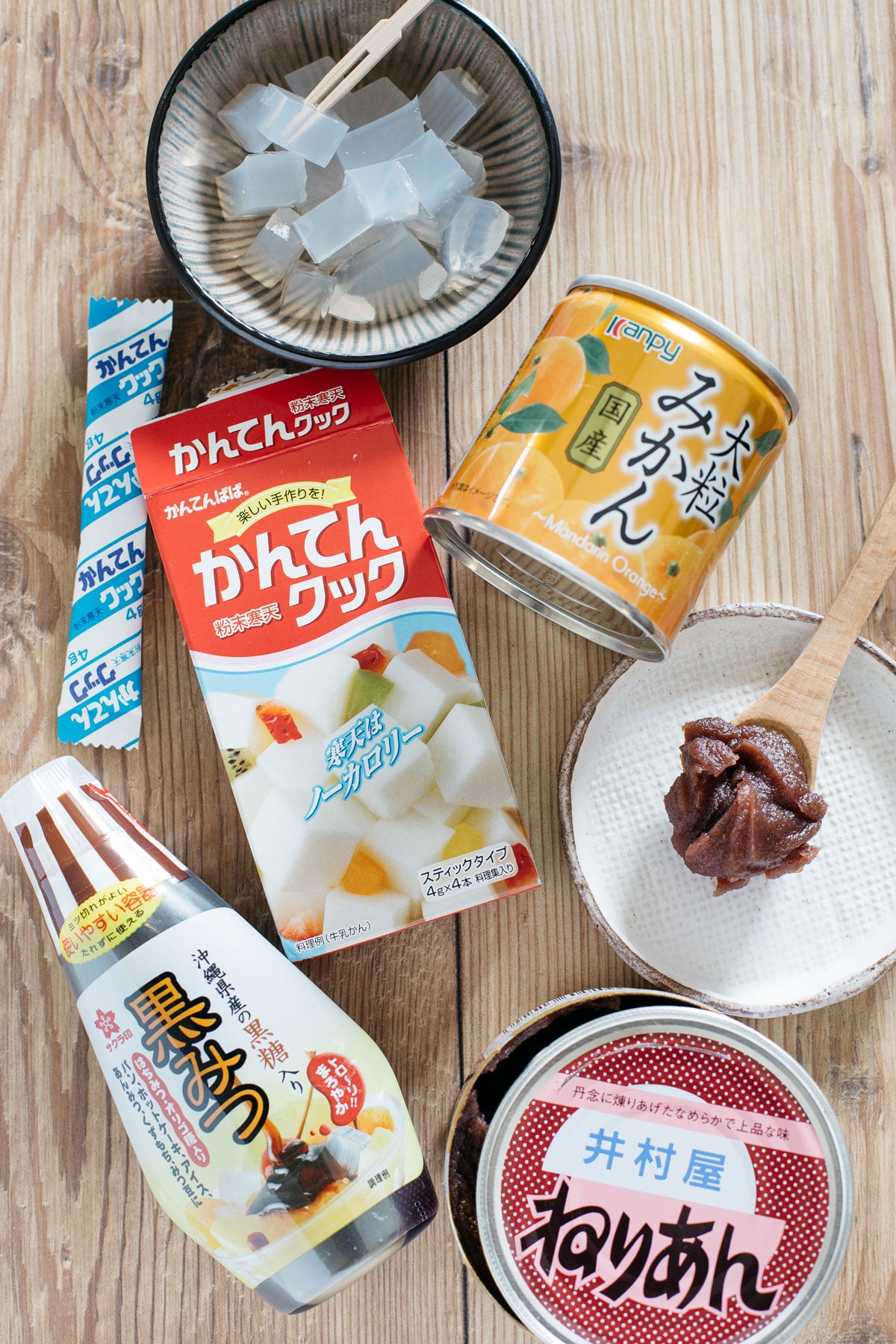 In my opinion, Kanten jelly is the hero ingredient of Anmitsu or Mitsumame even though “Kanten jelly” does not appear in the name of this dessert. Kanten is made from algae such as “tengusa” and “okonori. This coagulant agent was discovered by Mino Tanzaemon in 17th century by accident. It is widely used to make Japanese sweets and because it is completely vegan unlike animal based gelatin and also does not have any calories, it is a very popular diet food in Japan.

FYI, I created a comparison chart of coagulants that are mainly used in Japan. 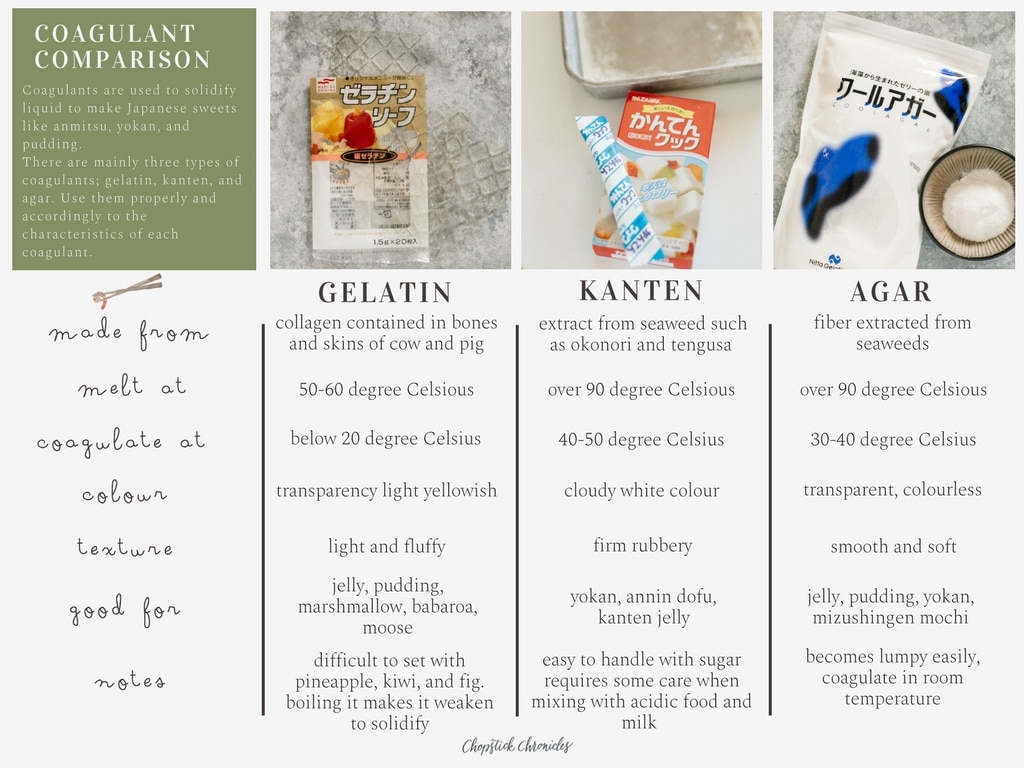 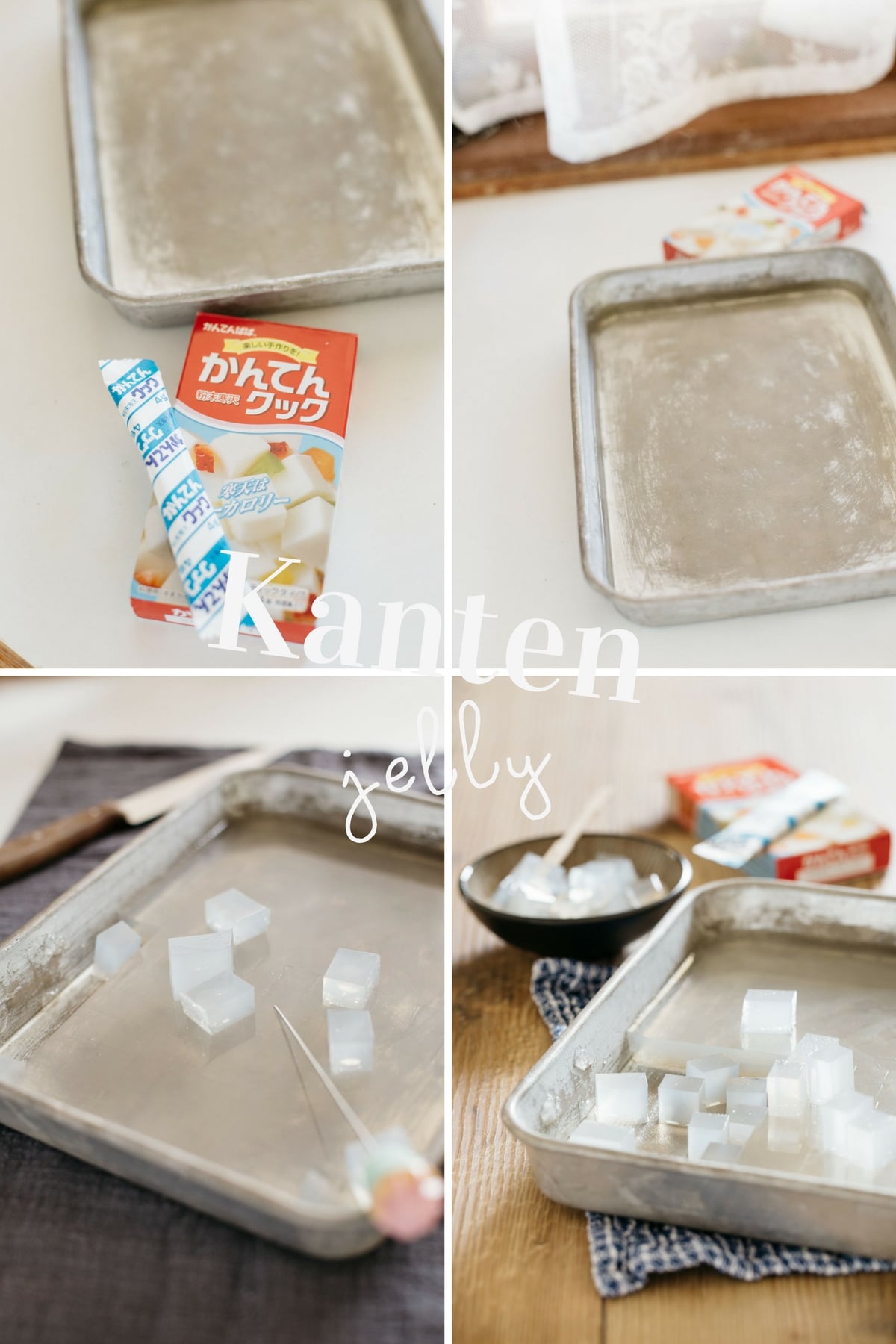 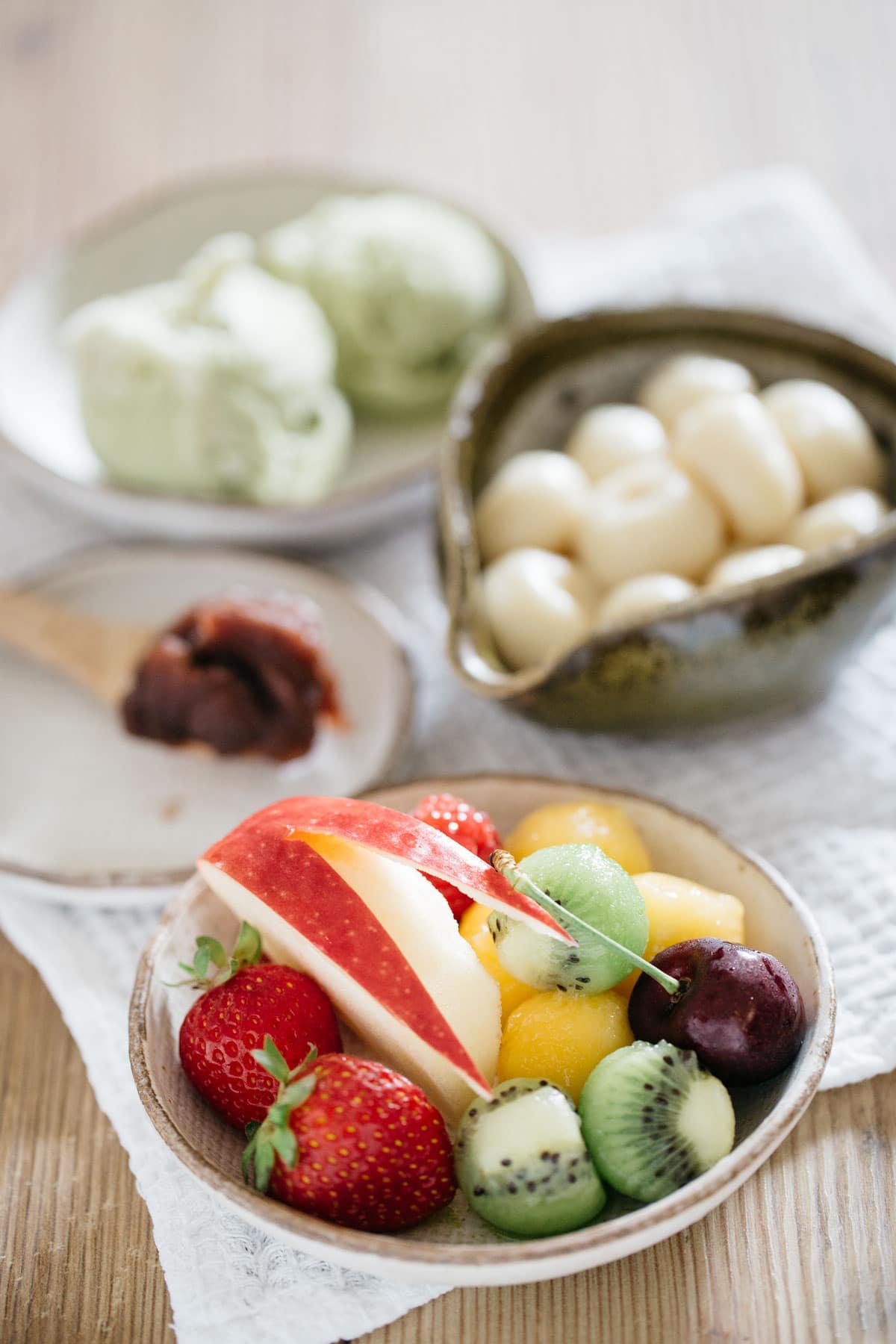 I also spent a bit to add canned mandarin too. It was very special treat I could have when I was child. My mother only allowed us to have this mandarin when I and my two little sisters were sick. Those little canned mandarins were so deliciously cold and refreshing when I had high fever and could not eat anything but something cold. It has been too hot so I treated myself and spent about A$6 for a small tin and cut the apple into rabbit shape just for myself. 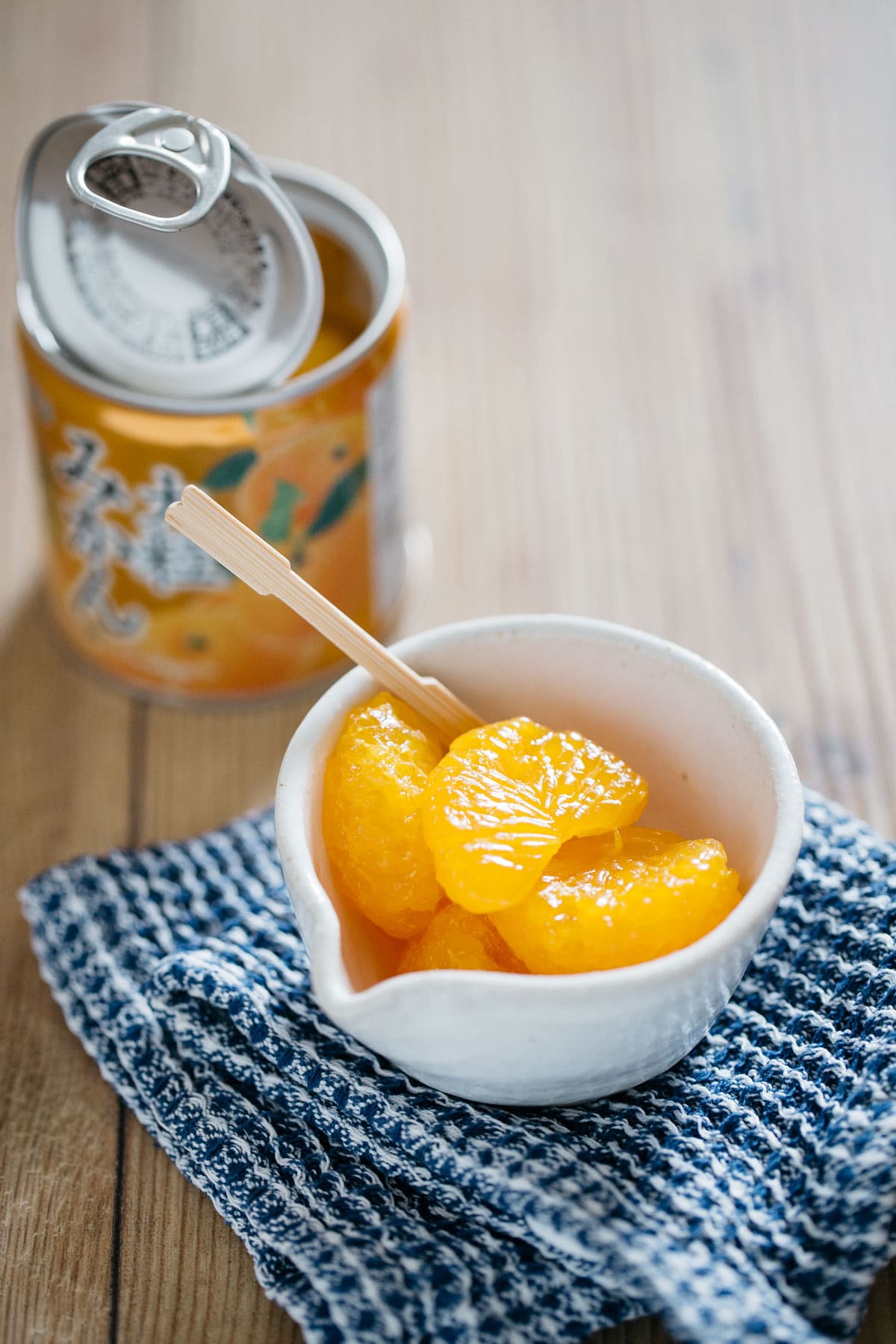 Once you’ve gathered all the ingredients and toppings, just assemble them in a bowl. Kanten jelly itself does not have much taste so you need to pour brown sugar syrup called “Kuromitsu”. If you can’t get this kuromitsu, you can replace it with Hachi (bee) Mits u(syrup), aka honey,  or make your own Kuromitsu. 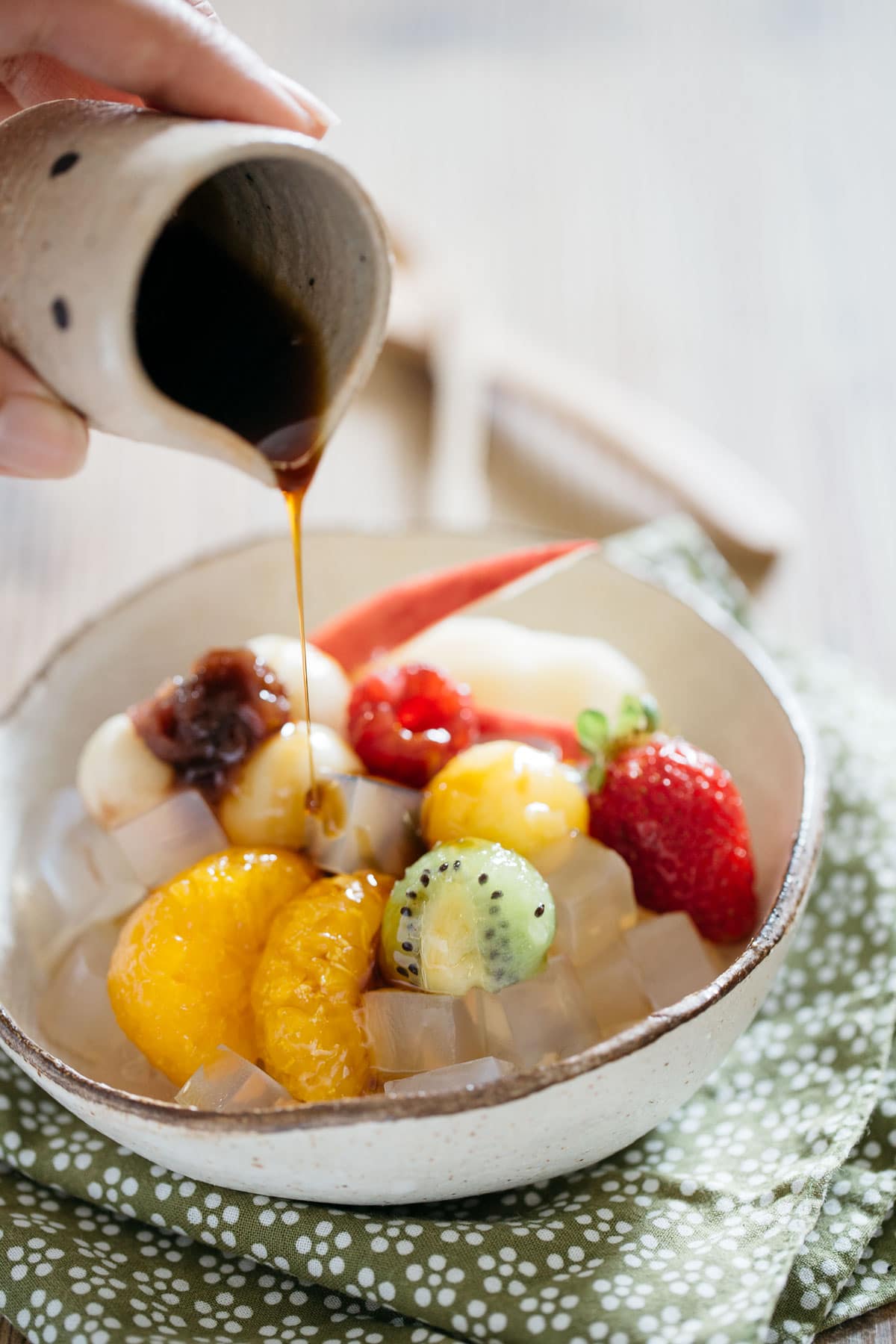 *1 The kanten I used came in powder form. 1 stick contained 4 g of Kanten powder. follow the direction of your Kanten  *2 I used store bought azuki bean paste "An" but you can make them following this direction. *3 Fruit of your choice, you can use any fruit.