Demi-Glace sauce is a classic French sauce that is used in Japanese cooking too. This versatile and delicious sauce is full of flavor with a deep rich beef taste that will elevate any dish. It can be used on its own, as a base for other sauces, soups and stocks, or added to Japanese dishes such as Hayashi rice and stewed hamburger.

Classic demi glace takes a long time to cook, involving multiple steps from simmering and straining to reducing. But you can learn how to make it at home with an easy shortcut!

What is Demi-Glace sauce?

This decadent French sauce is a combination of one part Espagnole sauce and one part beef stock. It is a thicker rich brown sauce that pairs particularly well with meat dishes like roasts and Japanese hamburger steak. It has an intense depth of flavour that delivers a powerful punch to a dish, which is why it’s something chefs and home cooks love to use in the kitchen. Demi-glace is usually also used as a base for other sauces or added to soups, stews, stocks, and gravy to enhance the flavours.

In Japan it is commonly used for “yoshoku” western style dishes such as Hayashi rice and Omurice. Making this sauce generally involves a lengthy process of stewing roasted beef/veal bones, vegetables, and herbs then simmering for many hours. It is then strained and finally simmered again until it reduces to half the original amount. Reducing the sauce needs to be done carefully and slowly in order to avoid burning the demi glace This unfortunately takes a lot of time, but luckily I have a shortcut below!

What is demi glace used for in Japan?

So why is this classic French sauce in a Japanese food blog? Because we enjoy all sorts of cuisines in Japan and often adapt things to suit Japanese pallets. Japanese people have taken this rich sauce from French cuisine and used it in a way that suits our tastes. In Japan, the sauce is often used for Yoshoku recipes. Yoshoku refers to dishes influenced by western style cooking. A typical and well-known example of Yoshoku is Omurice and Fried Shrimp (Ebi Fry). Often Yoshoku recipes call for demi-glace sauce to be used in them, for instance, Hayashi rice. This dish is made from thinly sliced beef, onion, mushroom, green peas, red wine, and demi-glace base sauce. It’s very delicious and a classic way we use demi-glace in Japan.

Demi-glace sauce is a very common thing to be used in Japan. Since it is so time-consuming to make from scratch, canned demi-glace is readily available in supermarkets in Japan. I certainly have used the canned version to cut down time and make cooking meals easier. However, I have never found canned demi-glace in Australia so I had to find a solution.

As previously mentioned, Japanese demi-glace sauce is made from roasting beef and veal bones and simmering and reducing to make brown stock. That stock is then used to make Espagnole sauce- a combination of beef stock, mirepoix (onion, carrot, celery), tomato paste, and roux. Making the sauce takes many hours. I usually don’t mind to put some effort into great food, however I don’t always have time to spend that long. So I decided to use an instant pot method and I’ve adopted a recipe from a cookbook that I bought in Japan called “Yoshoku”. Instead of using bones, I use ground beef and cook it altogether in the Instant Pot (instructions in the recipe card). Another way to cut down time making demi-glace are to use store-bought beef stock.

How to store the sauce

If you don’t alter the recipe, it will make about 1-1.5 liters of sauce. I usually divide it into two to three 500ml batches, pour them into ziplock bags and store in the fridge or freezer. It stores for 1-2 days in the fridge and about a month in the freezer. It can be used for Hayashi Rice, Hamburger stew, or to drizzle over Omurice. 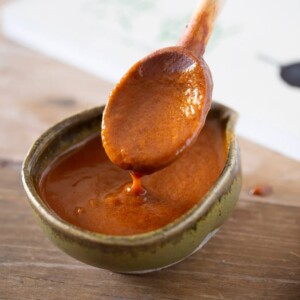 *1 It can be replaced with Tomato juice if you can not access to Pasata sauce *2 Any red wine is good. I used sweet red wine because I like sweetness in the demi glace sauce.  *3 If you don’t have an Instant Pot, use a frying pan and brown the vegetables.  *4 If you don’t have an Instant Pot, simmer the sauce about 3-4 hours.  *5 It took about 1 hour to simmer on low heat.