New Year is fast approaching so I thought it’s about time to start preparing what I’m going to cook on the day and I decided to make Sekihan. New Year is a big celebration in Japan and one of my favourite parts of the holiday is the big feast that we eat. Sekihan, which is a type of Japanese rice made from glutinous rice and azuki beans, is one of the delicious foods that we eat as part of the New Year’s feast. I published this recipe a year ago, but since I gifted myself a Duo Plus 60 Instapot pressure cooker this Christmas, I decided to update my Sekihan Rice recipe using my new machine. 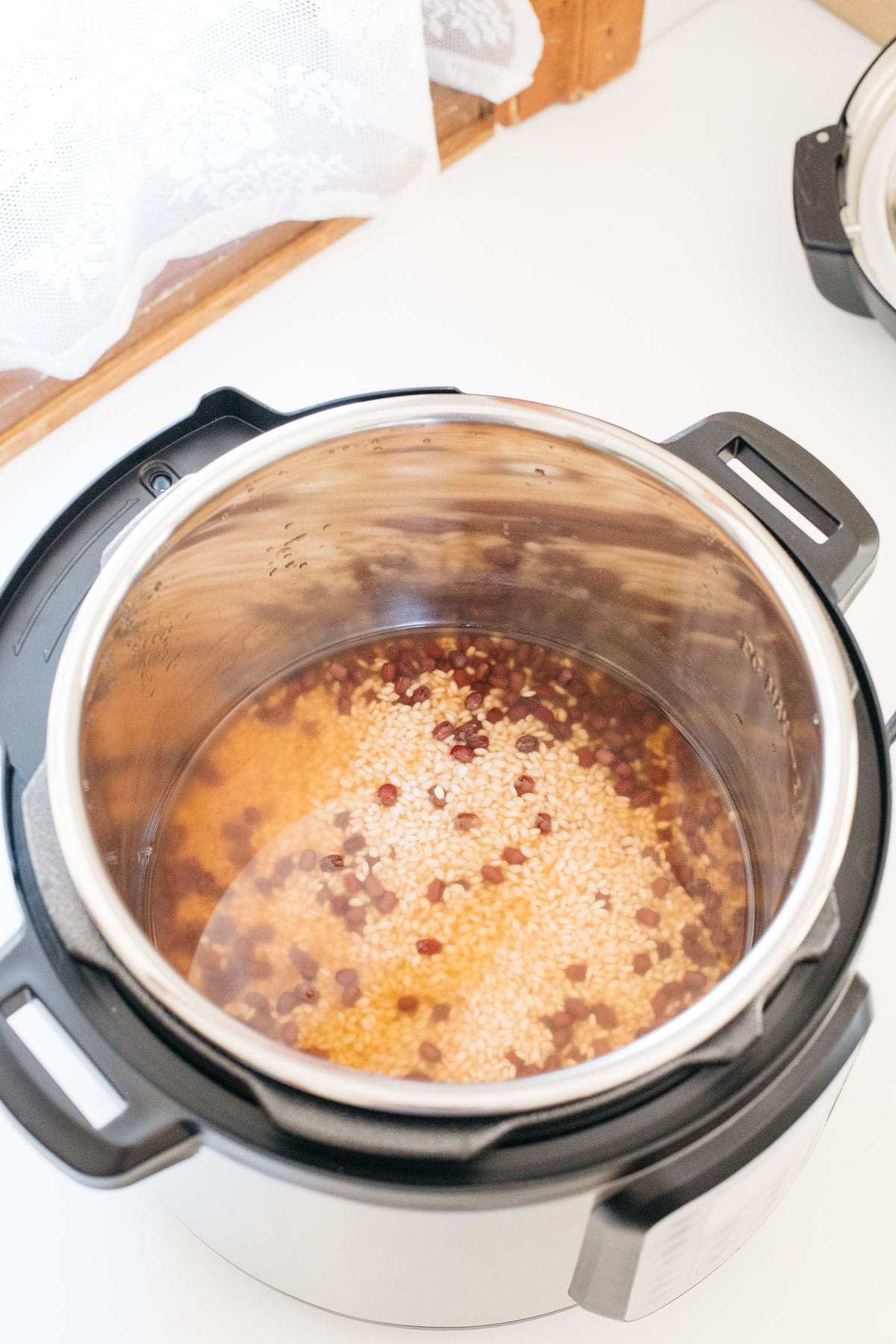 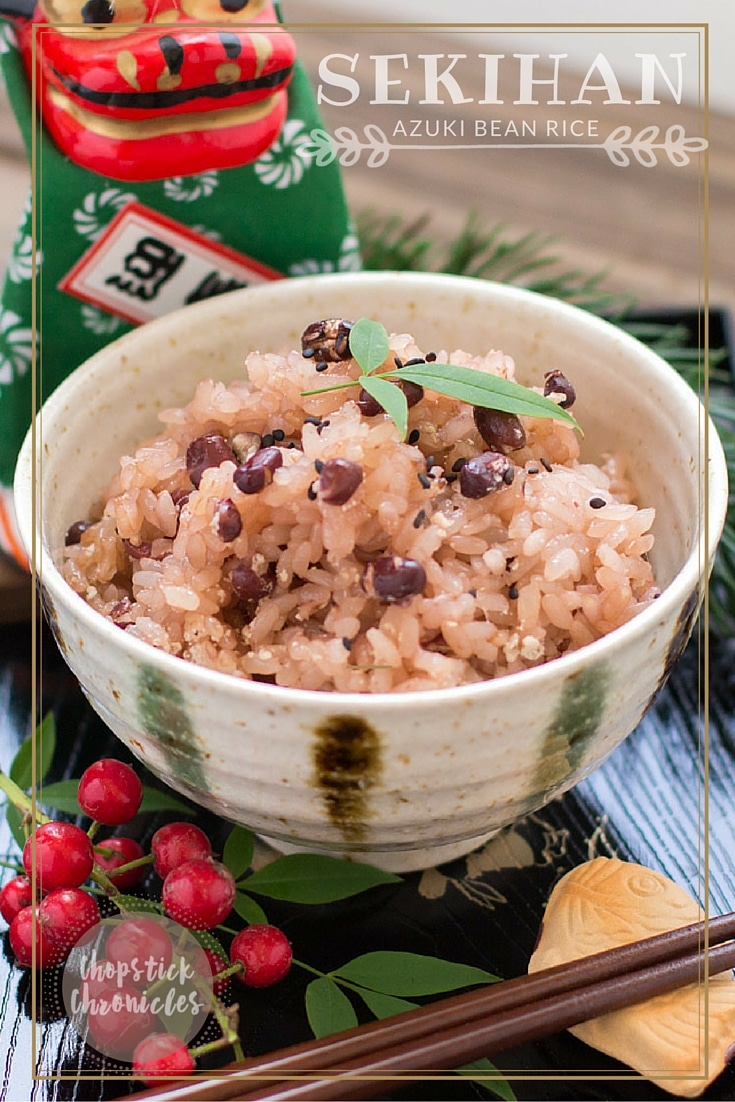 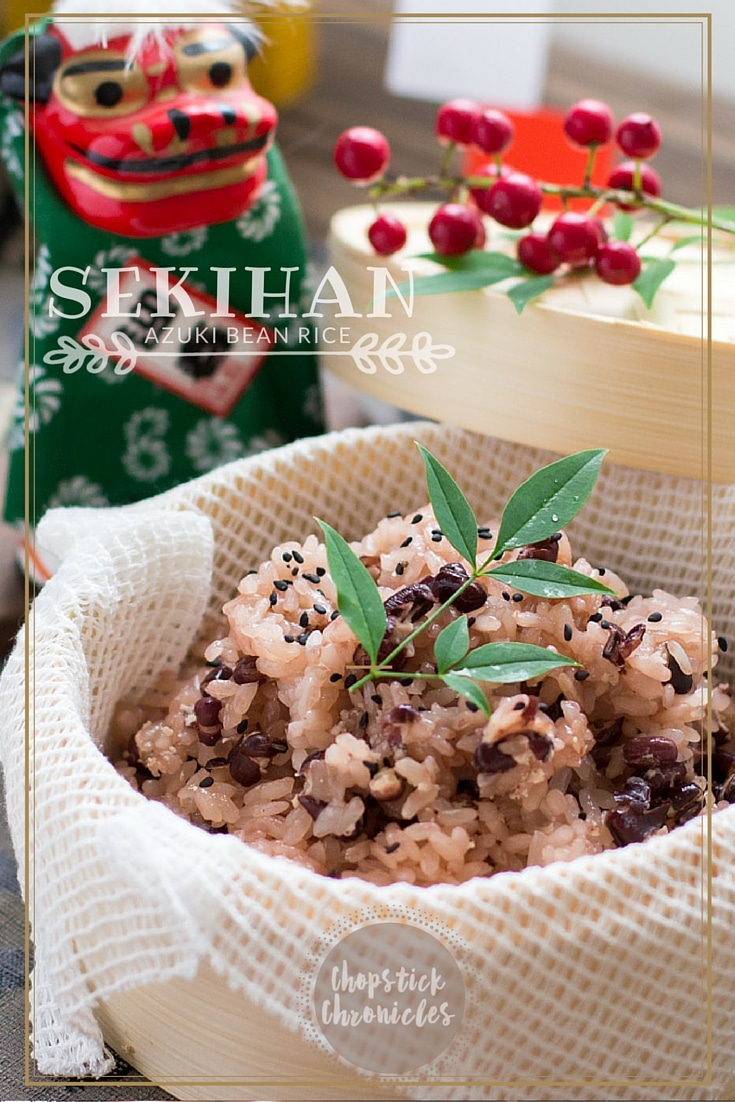 By now, many Japanese people would have started to prepare and cook the New Year’s feast, called ‘Osechi Ryori’ in Japan. Many dishes are usually flavoured and seasoned well to prepare for New Years day so that everyone can relax and celebrate New Year’s days without the hassle of cooking. However, all of my family are in Japan, which means I don’t need to prepare a big feast for anyone so I just make small amounts of New Year food on the day. 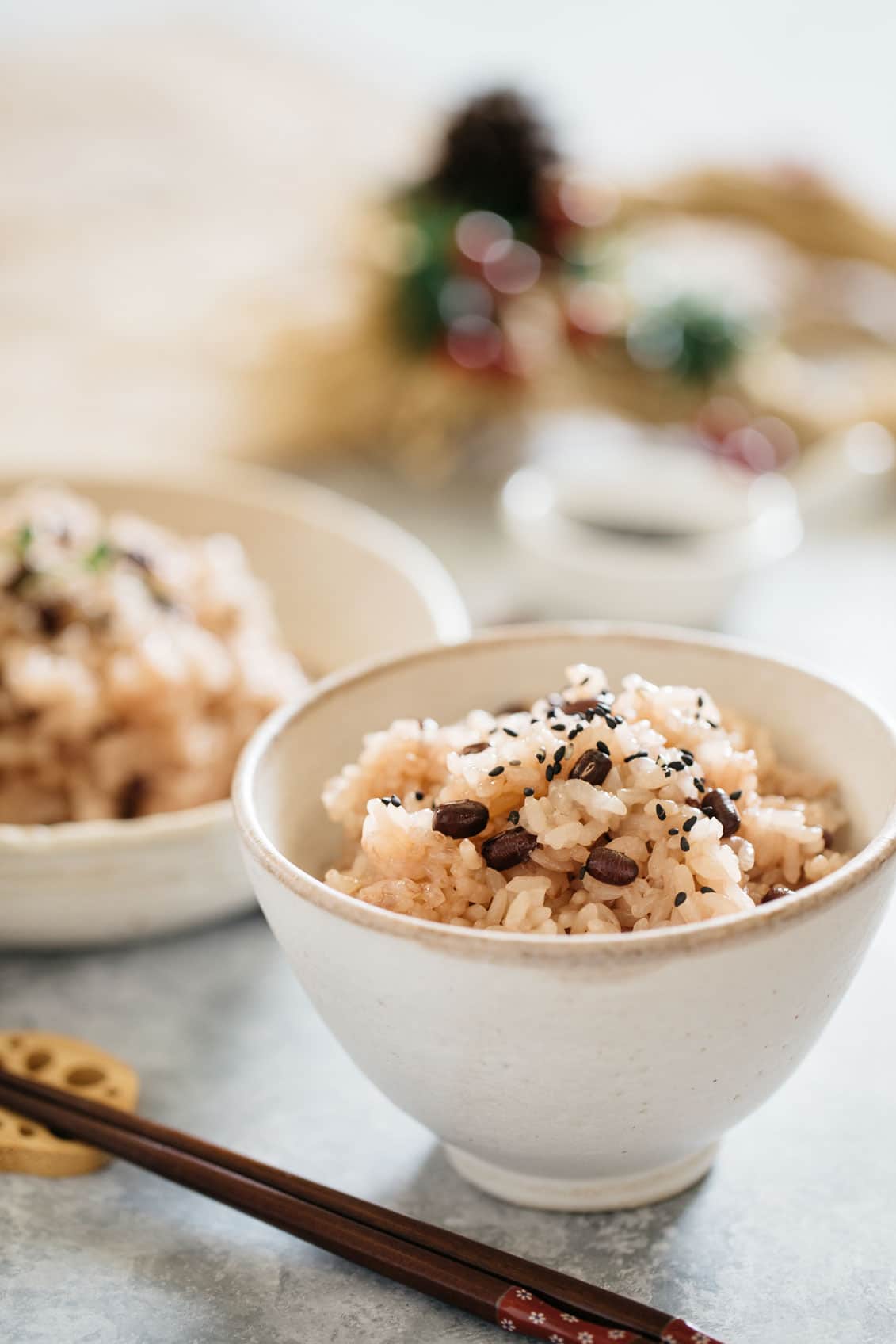 Nowadays many people order Osechi Ryori from department stores, local supermarkets, and Japanese restaurants. Close to the end of the year, you will see brochures advertising Osechi Ryori. It would be much easier to just order the food but since I no longer live in Japan, that’s not possible. However, it’s still nice to cook this easy and delicious Sekihan at home and at least feel as though I’m in Japan for New Year. 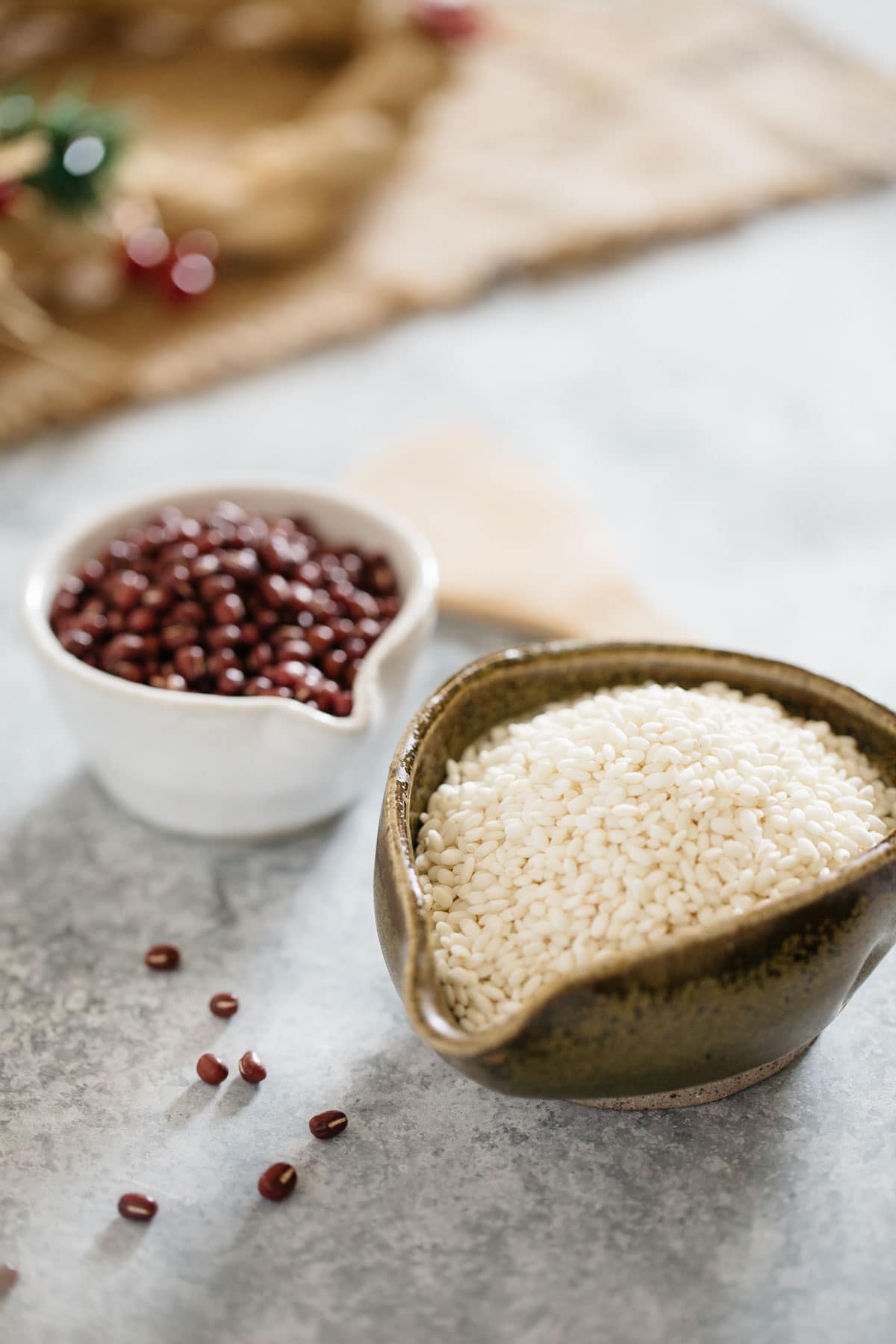 Using a pressure cooker, this Sekihan Azuki bean rice is very easy and only requires two ingredients; Mochigome (glutinous rice) and Azuki beans, which nowadays can be found in outside of Japan. In Australia (and other countries), they can be found in Asian or Japanese grocery stores or in the Asian food aisle of regular supermarkets. 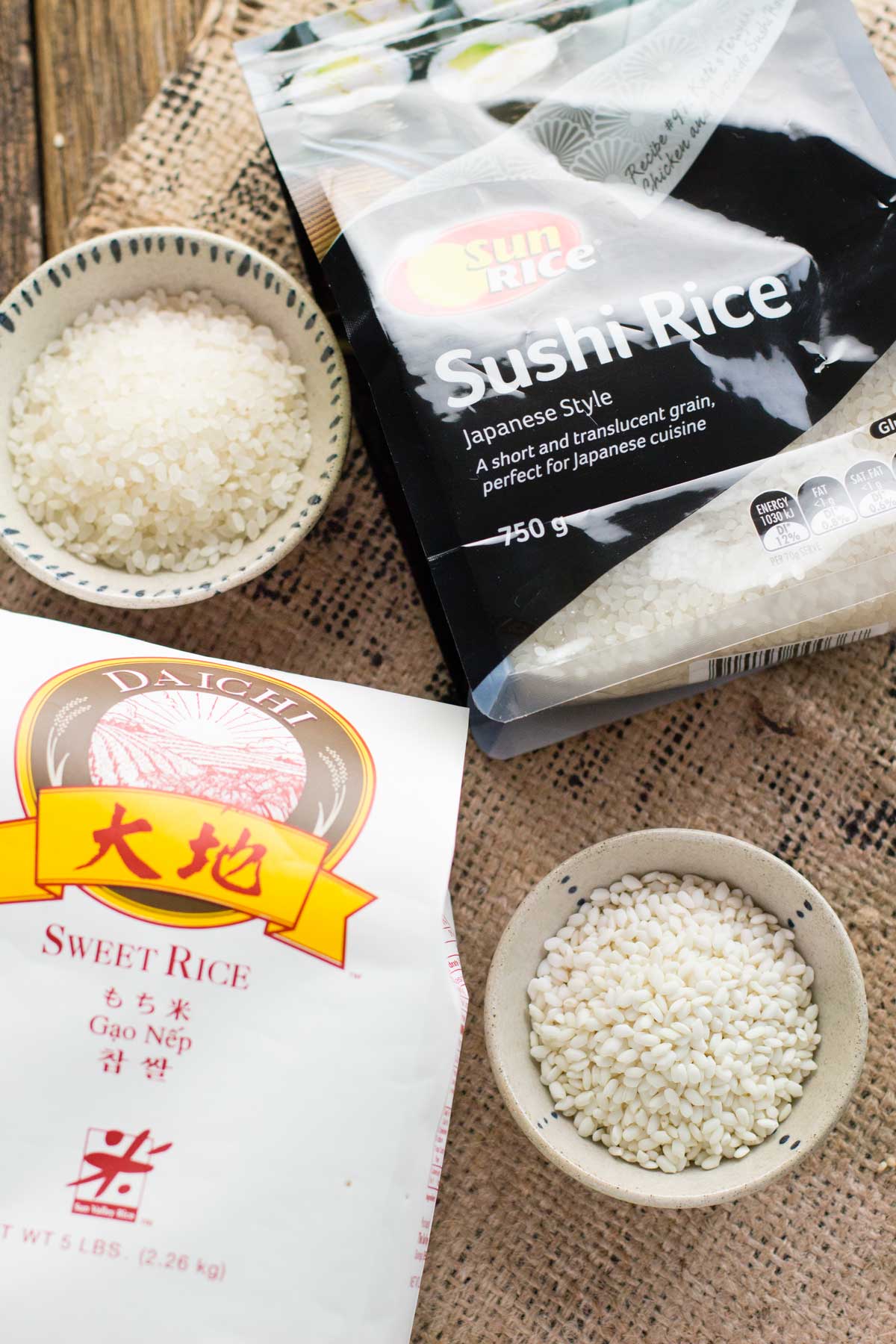 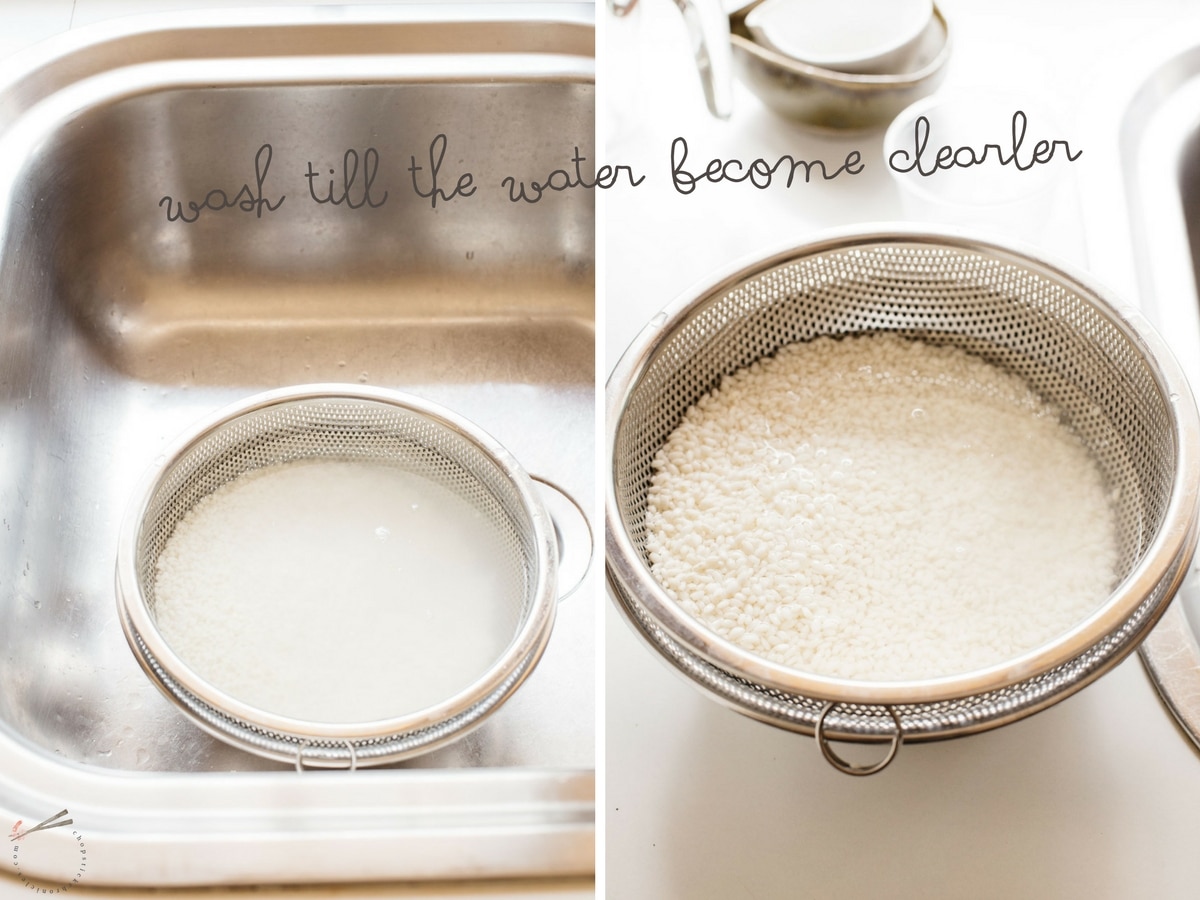 Sekihan is a traditional Japanese rice dish, served at many other festivities too, like birthdays and weddings, because of its celebratory red colour.  Traditionally, the rice is cooked by steaming, when we did not have pressure cookers. If you are going to decide to cook this dish in the traditional way, you need to soak the rice in water for 6-8 hours and if the rice is old, it needs to be soaked for longer. Then drain the soaking water and steam cook it. 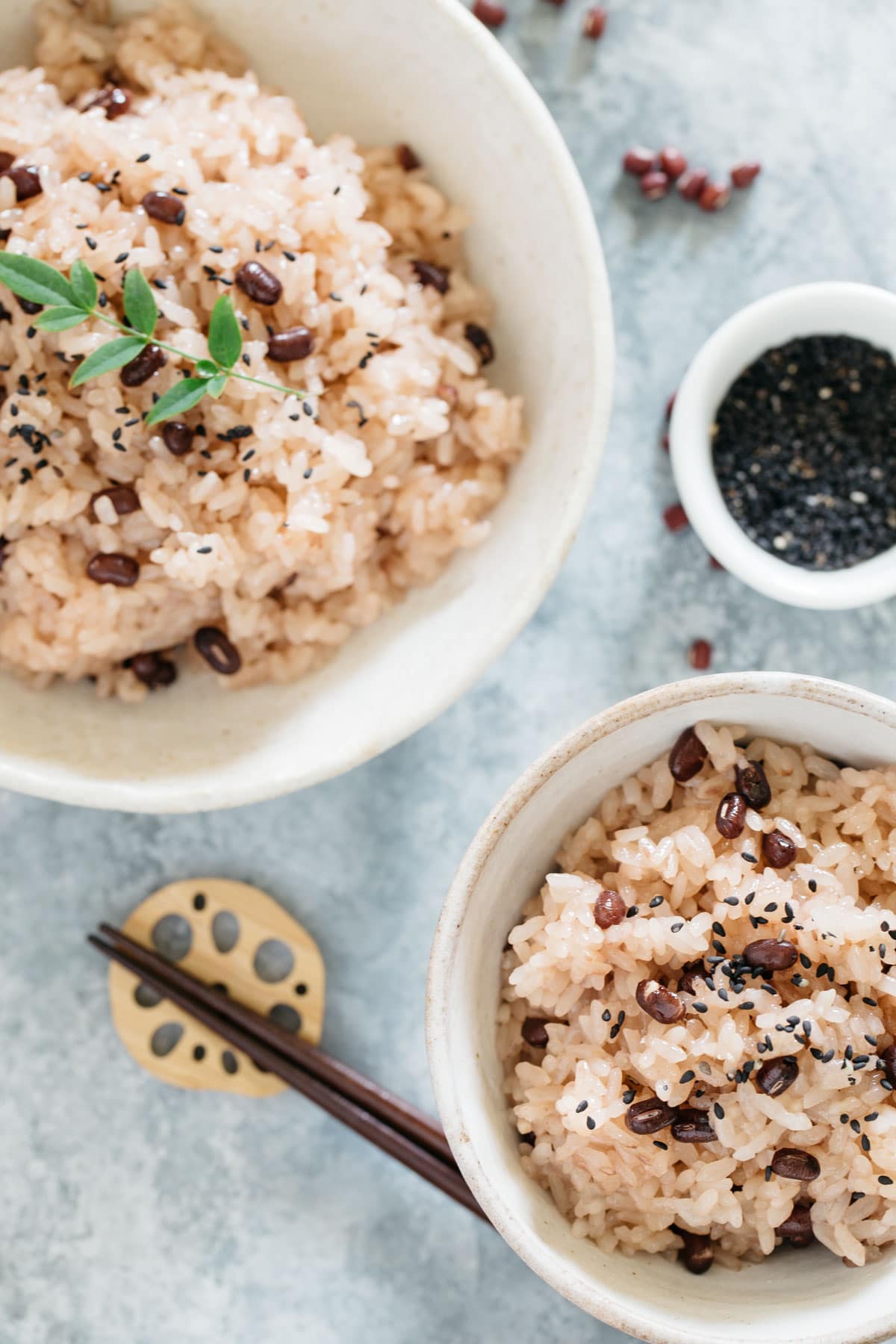 When we cook ordinary rice in a rice cooker, we let the rice grain absorb some water before cooking it so that when the rice is cooked it is soft. However, do not leave glutinous rice in water if you are going to use a rice cooker or a pressure cooker, because the water absorption rate of glutinous rice is higher so there ends up being not enough water to cook it or if you add water to cook, it ends up soggy. 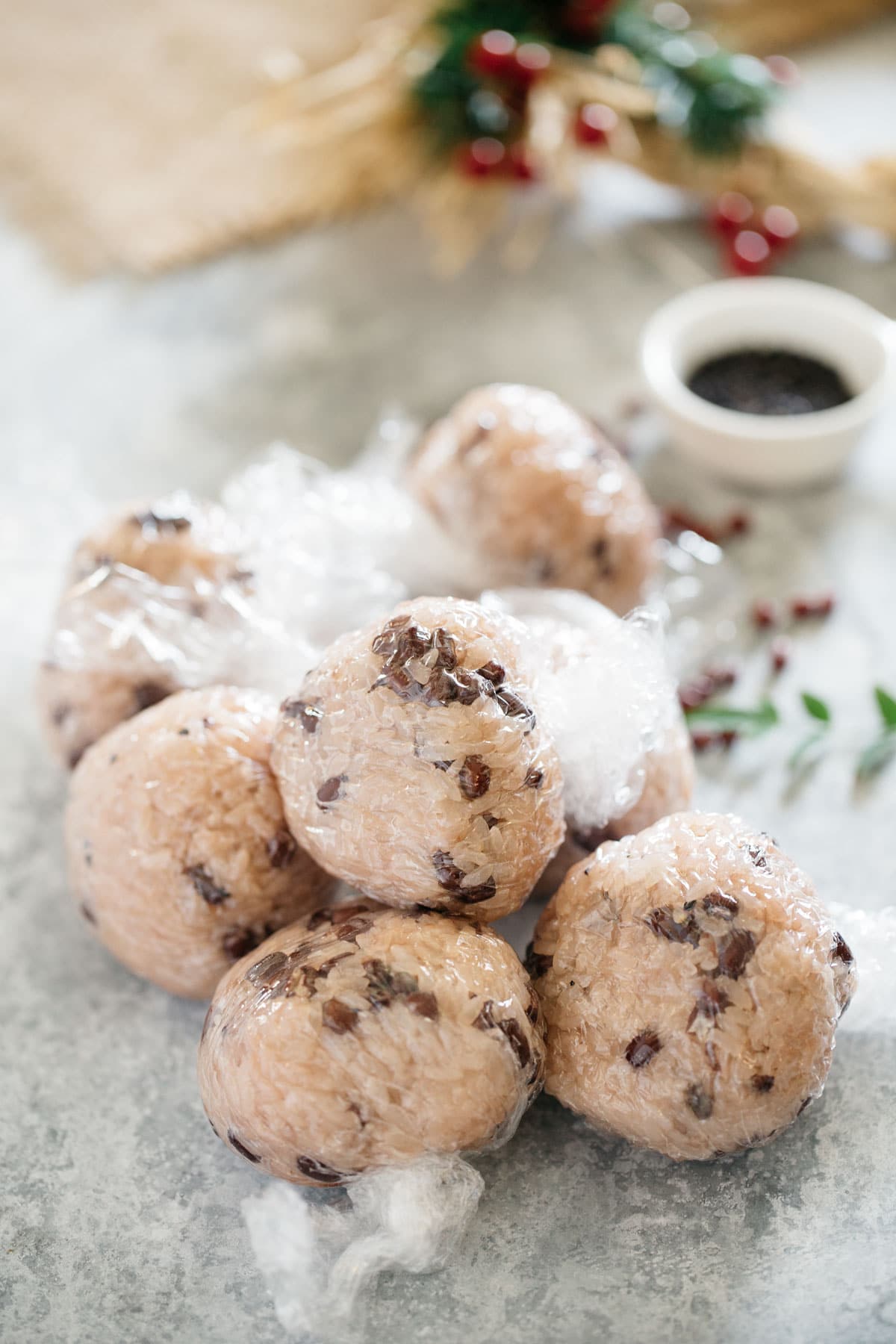 My mum always makes this rice for New Year’s because she knows how much we all love it, especially my son. I am going to freeze this as Onigiri for him so that he can eat this when he comes back in two weeks time. 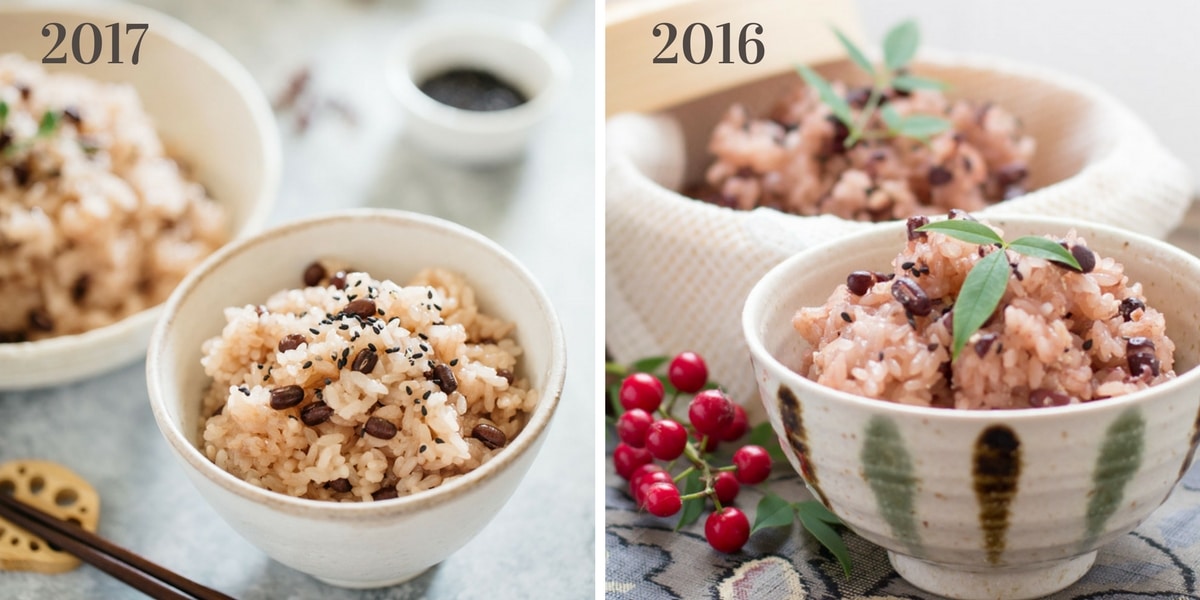 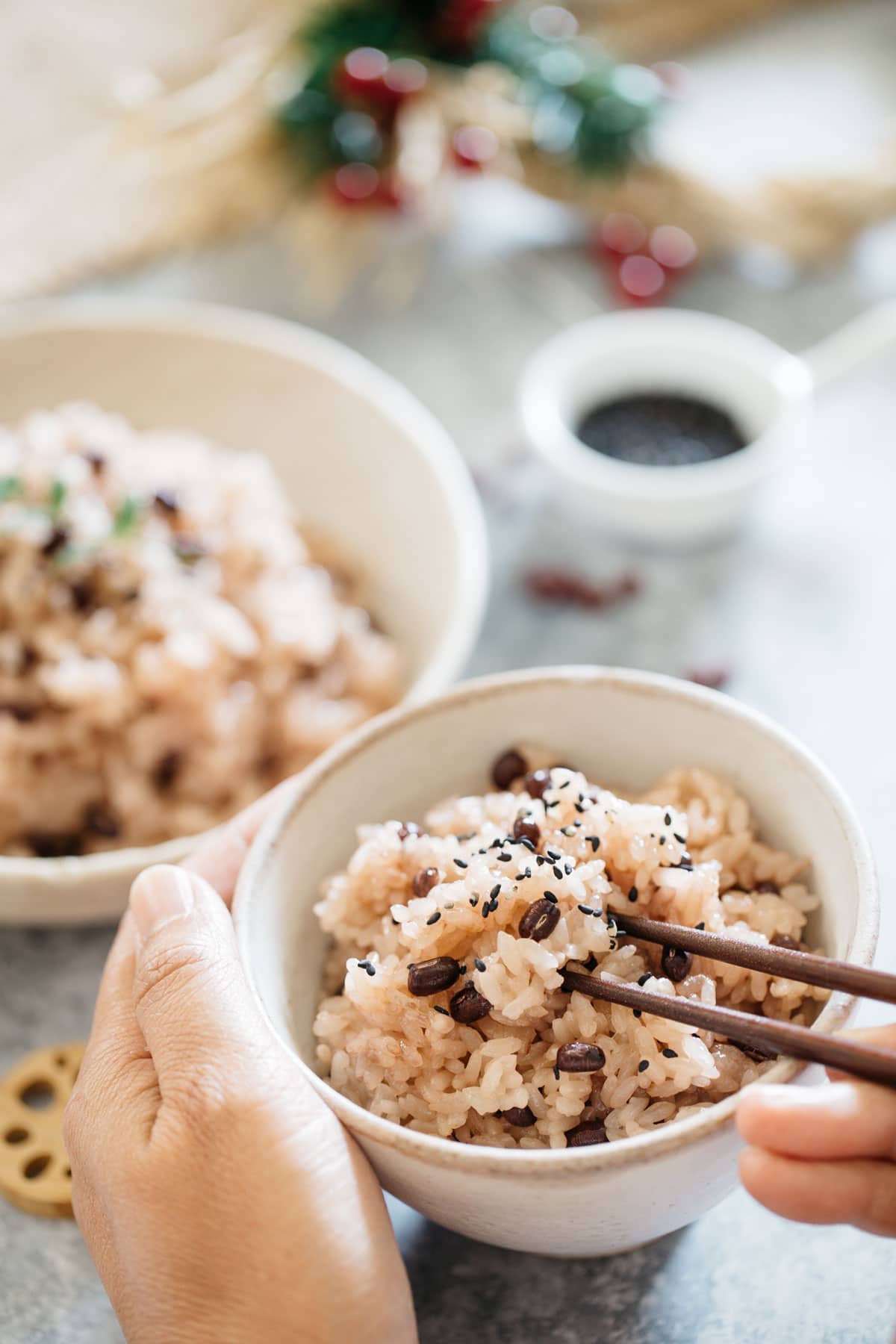 And don’t forget to check out the other New Year specialty food recipes like the Kouhaku Namasu (Carrot & Daikon Vinegared Salad), and the Tsukune Dango (Chicken Meatball Skewers)!

If you liked my recipe for Sekihan Azuki bean rice, please rate it and leave a comment below. Also, don’t forget to follow me on Youtube, Pinterest, Facebook and Instagram to keep up to date with all the latest happenings on Chopstick Chronicles. Don’t forget to use the hashtag #ChopstickChronicles so I see your wonderful creations! *1 Make sure the steam release handle is set to “Sealing” *2 For pressure cooker user the instruction is exactly same except how to set the Instapot. *3 Adding salt order is important. Do not add the salt to the Azuki Bean. The salt makes azuki bean firm and will not be cooked properly.